South of the Poison Waste

Helwyr Cywir is the general of Seren's army in the Heart of Gielinor. Helwyr is a skilled hunter and sorcerer of the Cywir Clan, which hails from Tarddiad. While on Tarddiad, Helwyr slew a great monster, known as the Hunllef, a predator of great threat to the Tarddian elves. Upon the beast's death, he used elven magic to draw upon the energy of the creature, bending it to his own will, allowing him to take on the very form of the beast for himself.[1] Helwyr was also one of few Cywir elves who left Tarddiad, driven by the desire to help the elves back on their home planet. At some point early in the Fourth Age, some of his elves travelled far away from Isafdar to test the limits of their link with their goddess.

Although he only had a grudge against Gregorovic, Helwyr viewed the Twin Furies and Vindicta as "creatures of darkness", and decided to hunt them down to protect the lives of others. After hostilities erupted between the four factions, Helwyr called upon the elves of Seren to claim the Heart in her name and save his clan.

In Challenge Mode, Helwyr is given an additional 100,000 lifepoints and uses a new ability against the player in combat. The damage from his bleeds, mushrooms and cleave attack are all at least doubled. His Cywir alphas are slightly stronger and have 2000 more health (5000 total).

The player must avoid his claw attack, as apart from the increased bleed damage, the claw attack will not only deal massive damage (about 7000), but also disable protection prayers. Therefore it's highly recommended to Resonance his claw attack for massive healing (up to about 7000). However do note if you are taking bleed damage, resonance will heal off the bleed instead, making you vulnerable to the claw special that follows.

Helwyr's new ability is that he is able to orchestrate the mushrooms in a specific pattern to explode them and deal massive damage (~5500) to the player. When the mushroom explosion special attack commences, the northernmost row of mushrooms is untouched (unless his nature empowerment hit some of those) while all other mushrooms will grow and explode after a few seconds, then the row of mushroom directly south becomes safe while all other mushrooms will grow and explode and so on, until the last row of mushrooms is reached. Between each explosion you only have enough time to move from the node/centre of one mushroom to any of the adjacent node/centres of the 8 mushrooms surrounding it. Because of this and the fact that some mushrooms will still be puffing out green gas, it's recommended to plan out a safe path from north to south avoiding the puffing mushrooms before the explosion attack happens.

Once the mushrooms have finished exploding, surge back north immediately after Helwyr does his "Nature, lend me your aid!" attack to dodge the puffing mushrooms as well as the "You. Will. BLEED!" that immediately follows, and position yourself back north for the next set of explosions.

Despite Helwyr's high K.O. potential, all of his high damage-dealing attacks can either be dodged or absorbed with the Resonance ability, and very little food is actually needed for this boss if you use your abilities correctly. Resonance Helwyr's first cleave attack ("You. Will. BLEED!") of the instance briefly after he spawns. Subsequently aim to dodge the first cleave attack (via surge) of every rotation after mushroom explosion and "Nature, lend me your aid!", and resonance the second cleave attack of each rotation after he has exhausted his wolf summons. Make sure to time the Freedom ability so that a bleed won't get in the way of your resonance. Devotion/Reflect/Debilitate+Revenge+Preparation is a very good way to counter Helwyr's spin/frenzy attack or wolf summons due to the high number of hits you'll be taking.

In terms of gear it is recommended to use dual wield Magic or Range with Superior Elite Void because Helwyr's autoattacks hit very low and how easy it is to die against Helwyr especially for the inexperienced (Void can be reclaimed for free under grave), and the highest level shield (Vengeful/Merciless kiteshield recommended) you have to deal with Helwyr's special attacks.

Sometimes Helwyr will skip straight to the "Nature, lend me your aid!" attack (seems to occur if you're too far away from him to be autoattacked) and this is particularly dangerous if it happens when the mushroom explosion attack is undergoing. In this situation it is best to either Barricade to block all damage or simply teleport out. 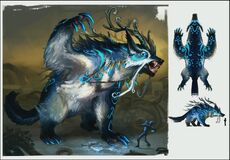 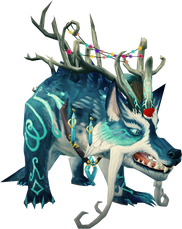 Retrieved from "https://runescape.fandom.com/wiki/Helwyr?oldid=19226127"
Community content is available under CC-BY-SA unless otherwise noted.