RuneScape Wiki
Register
Don't have an account?
Sign In
Advertisement
in: Items that are always kept outside the Wilderness on death, Untradeable items, Items that can be disassembled,
and 15 more
English

View source
watch 01:54
Arcane: League of Legends - The Loop
Do you like this video?
Play Sound
This article is about the herald cape available from the heralds in Lumbridge, Falador, and Varrock. For other uses, see Heraldry.

You'll have to revisit a herald to get a new cape if you destroy this one.

A cape for those who love their city.
Herald capes show allegiance to Falador, Lumbridge or Varrock and are obtained from the location's respective herald. The design of the capes is customisable and customisation options increase as a player completes tasks or quests related to the area the cape represents. By default the capes are all identical except the sigil in the middle, which is an animal associated with the location being represented. Selecting a location for the herald cape is reversible, as capes can be switched freely at heralds. All design customisation are lost upon switching to a different herald cape.

Players can also add their chosen 'crest' to the top of their cape. In addition, the cape can be placed on a cape rack in a player-owned house.

An additional turkey crest for the cape was rewarded for the completion of 2011, 2014, 2015, and 2016 Thanksgiving events. This crest also enhances the Give Thanks emote when the cape is worn.

The herald of Lumbridge can be found between the Lumbridge general store and blacksmith. The Lumbridge cape requires the following tasks to be completed to unlock all design options:

The herald of Varrock can be found next to the fountain north of Varrock's archery shop. The Varrock cape requires the following tasks to be completed to unlock all design options:

The herald of Falador can be found near the fountain north of the Artisan's Workshop (and south of the Party Room). The Falador cape requires the following tasks to be completed to unlock all design options:

The design of the herald cape can be customised by speaking with the relevant herald or by using the right-click "Customise" option.

When all the above requirements are met, players can choose from 5 different trims and 5 different crests (applied to the bottom and top halves of the cape, respectively). The colours for the cape's background, the background of the heraldic sigil, and the trim/crest can also be customised. There is no pre-defined set of colours, instead a colour selection tool allows players to select the colours freely. If players change the cape's background colour to the default white, parts of the background will turn to the heraldic colour.

The selected design can be modified any time by revisiting the herald. The heralds seem to remember the last design players made at them, even after players have switched to another city cape and then returned. 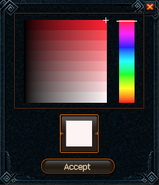