An old motherly witch with a curious smile and a hooked nose. 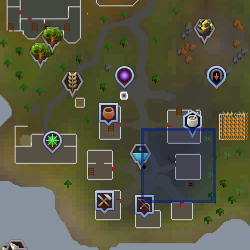 Hetty is a witch who can be found in Rimmington and is involved in the Witch's Potion miniquest. Only one potion is available from her, the centre of said miniquest.

She is located in the middle-right building in Rimmington, and since the Rimmington graphical update, her house no longer has a quest icon.

She also features during the Swept Away quest to enchant the broom. Players were asked to retrieve a newt from the trapdoor outside her house before she would enchant it. According to Maggie, Hetty "makes the best broomstick ointment this side of the River Salve."

She was also involved in the Cryptic Clue Fest IV, where she was the last NPC you had to take payment items to.

Retrieved from "https://runescape.fandom.com/wiki/Hetty?oldid=24562146"
Community content is available under CC-BY-SA unless otherwise noted.