See Skill mastery for a discussion of level 99 and lists of historical "firsts".

The HiScores is a website feature in which players are ranked by their experience in skills. The HiScores are updated with a player's stats each time they log out or leave to the lobby, with the exception that a player's hiscores do not update if they are automatically logged out of the game due to a system update.

The HiScores include a free-to-view Application Programming Interface (API) which can be used to track players, their clans and seasonal activities.

For players to appear on the HiScores:

In order to appear in the HiScores, a player must have achieved level 15 in a skill, unless more than two million players are already ranked. In that case, a player must have enough experience in the skill such that they are in the top two million players. The following table shows the current minimum levels for each skill to be ranked on the HiScores.

Clan HiScores were introduced in an update on 12 April 2011. It contains information about all clans registered at the Clan Camp.

Players are able to sort them by any category.

Winners are rewarded with the Crown of Supremacy, which becomes the Crown of Legends when the Seasonal Hiscore ends. Along with the crown, players also unlock an emote and a new title corresponding to the competition that they won.

Minigames set the minimum "level" needed to be ranked differently, according to the scoring system. See the table below.

The following hiscores have been removed, but had the given minimum scoring to be ranked while active.

The HiScores have been reworked multiple times, including on 21 November 2003 (Update:Hiscores Reborn!), on 30 January 2006 (Update:New Look Hiscores), and on 22 November 2011 (Update:RuneScape Revolution).

It was announced on 15 November 2011 that from week commencing 21 November 2011, the hiscores would be no longer be available to free players, in order to remove dormant accounts from the hiscores and give new paying members a chance to get high on the scores. This caused a significant amount of controversy on the RuneScape Forums.

On 22 November 2011, the re-structure was implemented, making it a members'-only feature. When a term of membership elapsed, there was a 14 day grace period in which the account would remain on the hiscores. After this period, the account would not be shown on the hiscores until it was re-subscribed. This re-structure lowered the minimum requirement to be ranked in a free-to-play skill from 30 to 15.

After a Power to the Players poll decided that free-to-play players should once again have access, they were added in an update on 31 March 2014. 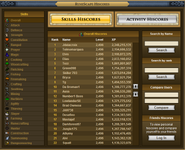 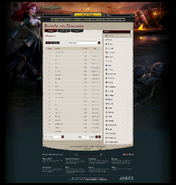 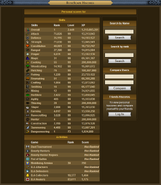 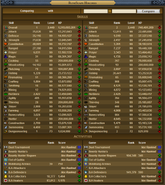 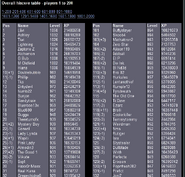 The old top-2000 in the early days of RuneScape 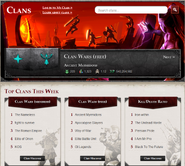