A seller of crossbow parts. 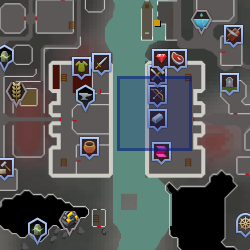 Hirko is a dwarven merchant that runs a market stall on the east side of Keldagrim, the capital of the dwarves. He is one of only three crossbow salesdwarves in the game.

Hirko sells a variety of items such as crossbow limbs and stocks, which can be used to make crossbows using the fletching skill. Purchasing parts from Hirko can save time, although he does not sell the much sought after rune and yew crossbow parts. Unfortunately, he does not stock sinew or crossbow strings, the final part needed to make crossbows. However, sinew can be easily obtained in the nearby forest outside of Rellekka by killing the bears that roam the woods.

Hirko also sells Bolt pouches, which can be used to store a certain amount of crossbow bolts. Buying bolt pouches from Hirko is the only way to obtain them. This item is not available in his trade selection: you must speak to Hirko about crossbow ammo and he will tell you about the pouch and ask if you would like to purchase it for 1500 coins.

Retrieved from "https://runescape.fandom.com/wiki/Hirko?oldid=24562467"
Community content is available under CC-BY-SA unless otherwise noted.