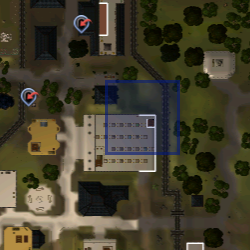 Historian Seth Minas is a Varrock Museum employee and can be found on the 1st2nd floor[UK], near the staircase. When you talk to him about the quests you have completed, you earn Kudos and fill some of the empty exhibits.

After completion of certain quests, you can go to Minas and give him information about them. He will, in turn for the information, give you Kudos and antique lamps (after certain amount of kudos has been earned from him). Kudos can be used for XP rewards and, in the future, will allow you to pass freely between the Digsite and the island north of it.

In total, you can earn 100 Kudos from Minas.

Retrieved from "https://runescape.fandom.com/wiki/Historian_Minas?oldid=25578650"
Community content is available under CC-BY-SA unless otherwise noted.