A local holy man who supports the people trying to get though Mort Myre. 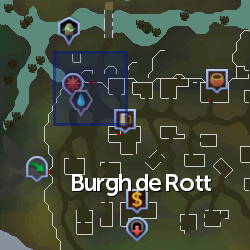 Hiylik Myna is a Saradominist priest, and one of the few surviving members of the Saradominist Order of Paterdomus. When Zamorakian monks attacked in Year 169 of the Fifth Age, he fled, leaving his fellow monks to be wiped out during the ensuing battle. He has since returned to Paterdomus, under the protection of the Misthalin mercenary protocol. He and Drezel, a fellow priest of the Order, are working to retake the temple, but the Zamorakians residing within make it difficult. He can be found near the bridge leading to Paterdomus, west of Canifis, and at the northern gate of Burgh de Rott.

He acts as a guide for the Temple Trekking minigame, explaining how it works and what the rewards are. If the player disables event prediction hints during Temple Trekking, Hiylik gains a new dialogue option to turn hints back on.

Additionally, he awards the Morytania legs 1 for completing the easy Morytania achievements.

Retrieved from "https://runescape.fandom.com/wiki/Hiylik_Myna?oldid=24562240"
Community content is available under CC-BY-SA unless otherwise noted.