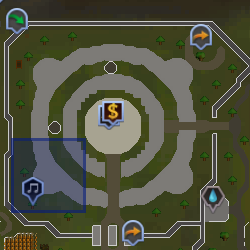 Hofuthand is a member of the Grand Exchange and the only dwarf involved in the business. He gives players the current average market value of some weapons and armour in the Grand Exchange. He does not, however, give the values of lower level items such as mithril and iron equipment.

Hofuthand's business requires a good deal of thinking, so he always seems to be deep in thought. Because of this, he doesn't say much about himself; although, based on his clothing, he is almost certainly from the dwarven capital city of Keldagrim. It seems he was sent by the Consortium to establish trade with the humans in Varrock. The exact reason for this is unknown, but based on the dwarves' recent involvement with the Dorgeshuun, it seems that the dwarves seek to establish ties with more of the world's races.

Retrieved from "https://runescape.fandom.com/wiki/Hofuthand_(armour_and_weapons)?oldid=25382659"
Community content is available under CC-BY-SA unless otherwise noted.