I can't wait to buy from a guy with Honest in his name... 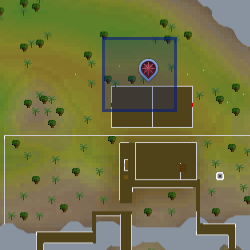 Honest Jimmy is a pirate who oversees the Trouble Brewing minigame on Mos Le'Harmless. He will explain the game and trade pieces of eight for various clothing and banners. If players use him to join a crew, he will send them to the crew with the least amount of players.

Honest Jimmy sells rewards at Honest Jimmy's House of Stuff, including naval clothing and flags, the stuff (increases the chance of getting a mature ale from personal brewing), and rum (acts as a teleport to the Trouble Brewing area). He also sells level 2 clue scrolls for 200 pieces of eight.

There is a bank deposit box next to him. This can be used to deposit pieces of eight, because they are not allowed in Trouble Brewing games, or to deposit snake hides dropped by the poisonous snakes nearby, which can be a good moneymaker.

Honest Jimmy may also be spoken to via NPC Contact. He can be asked about the time until the next game of Trouble Brewing starts as well as how many people are waiting for the game to start.

Retrieved from "https://runescape.fandom.com/wiki/Honest_Jimmy?oldid=25381942"
Community content is available under CC-BY-SA unless otherwise noted.