Start a Wiki
CSOS
This article is about the gardener in East Ardougne. For other uses, see Horatio (disambiguation).

Could do with losing a few pounds. 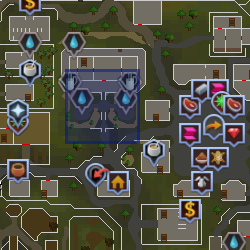 Horacio Dobson is the gardener to Lord Kurt Handelmort. He tends to the grounds of his house in East Ardougne. He will give the player a jade vine seed for free if one isn't owned.

He starts the Back to my Roots quest, and plays a minor role in the Tribal Totem quest.

Horacio will also watch over your Jade Vine for a fee of 10 Wildblood hops. If you try to pay him again, he will say "I'm already watching over your vine! You have ears like corn!".

Horacio also sells basic farming tools, which can be accessed by talking to him and asking Can you sell me something? It is not an actual shop and it has no set stock; each item has to be bought individually through the dialogue.

Retrieved from "https://runescape.fandom.com/wiki/Horacio?oldid=24927909"
Community content is available under CC-BY-SA unless otherwise noted.