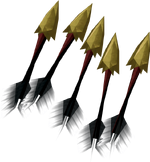 Enchanted hydrix bakriminel bolts have a 10% chance of triggering the Deathmark effect, which instantly grants the player 10% adrenaline and additional 1% from basic abilities for 15 seconds. Subsequent activations while under the effect of Deathmark will refresh the effect. The effect of Deathmark will remain active after switching amunition or even switching weapons. However, this is not the case with Ascendri bolts (e).

Onslaught can trigger the effect, although adrenaline gained after the 1st recoil hit will be immediately drained and doesn't stop its self-harm effect despite gaining adrenaline.

The chance of the special attack occurring is increased to 12% upon the completion of the elite Seers' Village achievements.

Retrieved from "https://runescape.fandom.com/wiki/Hydrix_bakriminel_bolts_(e)?oldid=24922870"
Community content is available under CC-BY-SA unless otherwise noted.