Start a Wiki
For the Magic weapon, see Rage of Hyu-Ji.

Hyu-Ji is an island in the Skull region of the Wushanko Isles, inhabited by the Sea orphans, humans who have fallen victim to an affliction that causes them to have gills, tentacles and fins. It was formerly ruled by a Khan known as Tubjub, but he was killed and replaced by an escaped convict known as Marcus Fine.

Attack by Tubjub and the Lost Men

The following takes place during A Thief in the Night, Do Unto Others, and Hail To The Khan.

An escaped convict known as Marcus Fine arrived onto the island in order to hide from the authorities in the west, and he became acquainted and friendly with the orphans. Some time after his arrival, he discovered that the orphans were disappearing, and suspected they were being kidnapped, and so he enlisted the help of the portmaster who had helped him hide there. The portmaster lent Marcus a ship, and Marcus discovered that the orphans were being kidnapped by mercenaries, and suspected that they were working with the Soothsayers, who desired to use their organs for their divinations. As the soothsayers would never accept live specimens, Marcus suspected the involvement of the island's Khan, Tubjub, who he believed to be acting as a middleman, the one handling the money and cutting the organs from his victims.

Marcus quickly found proof that Tubjub was behind the kidnappings, and planned to expose him by disguising himself as a mercenary and getting aboard their ship. He also discovered that the mercenaries Tubjub was using were the Lost Men: The most expensive mercenaries in the Eastern Lands, who tattoo their skin with maps of the lands. In order to disguise himself, he visited the claymistress in the Bowl region, who used an illusion to disguise him. Once he obtained proof of Tubjub's involvement, he informed the orphans and the khans' council, although Tubjub was able to escape.

Tubjub soon returned, once again accompanied by the Lost Men, with a fleet on ships to attack Hyu-Ji with. In order to stop them, Marcus formed a plan that involved using explosives created from resources on the island: Sulphur, charcoal and shell pieces to explode the Lost Men and Tubjub's ships. The plan was successful, and Tubjub and the mercenaries were killed. As thanks for his help, the council of Hyu-Ji and the Sea orphans requested that Marcus become Khan of the island, to which he accepted.

Attack by the Zamorakians and the Purists

The following takes place during Spreading the Word, Voices Raised in Lamentation, The Belly of the Whale, and God's Grace Upon You. 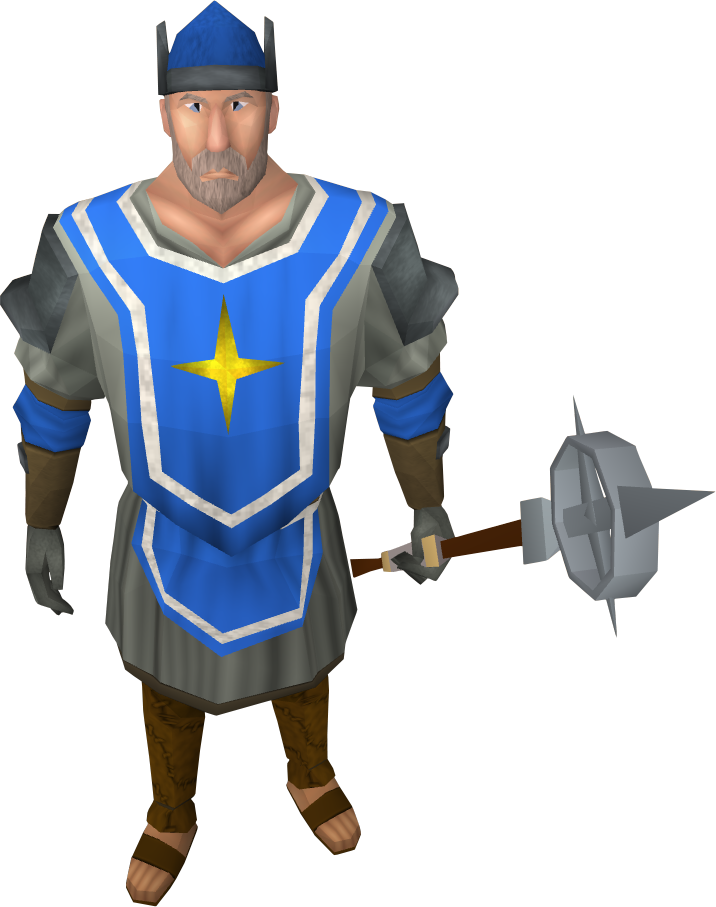 The Saradominist priest Tomlin was instructed by Brother Jered to head to the Eastern Lands to spread Saradomin's beliefs to the inhabitants there. Tomlin intended to build his church in Hyu-Ji, even though Jered wanted it to be built elsewhere. He revealed that he wanted to build it there because the sea orphans needed faith, and he also enjoyed partaking in violence, wanting to defend them from the Purists.

Tomlin eventually felt remorse for letting the sea orphans suffer and with the portmaster's help, went to the Bowl region to visit an island that was said to cleanse one's heart. However, he did not set foot on the island, as he was distracted to a nearby island and found the Zamorakians and Purists plotting to kill the sea orphans.

With news of this sinister plan, Tomlin returned to Hyu-Ji, where he prepares its defence. Tomlin reveals that he did not pay the sea orphans, having had them work without pay for its construction. He used the gold to bribe the mercenaries, who quickly drove off the joint Zamorakian-Purist forces off Hyu-Ji. With the news of the battle, the sea orphans celebrated by completing the church, and Tomlin was now considered a friend of the people.

Outbreak of Disease and attack by the Blazing Lanterns

The following takes place during Specimens In The Wild, The Scientific Method, The Act of Observing, and People Are The Deadliest Disease.

Bethan, a fame-seeking scientist from Varrock museum who planned to write a book, traveled to Hyu-Ji to study the orphans, suspecting that as human mutants, they would have a developed physiology and would be potentially disease resistant. She started building a lab on Hyu-Ji with the assistance of some of the orphans, who told her that Finia, a sea orphan sorcerer - whose mutation caused him to be covered in spines like a puffer fish - may be of interest to her. However, he had recently been kidnapped by Blazing Lantern pirates, who found his appearance amusing, and had begun using him as a figurehead on the front of their ship. Bethan enlisted the help of the portmaster that helped her get to Hyu-Ji in the first place to rescue him, who proceeded to send a ship out to rescue him.

The ship was successful in retrieving the still-living Finia from the pirates, and in the meantime the lab was successfully built. Bethan soon began doing tests on one of Finia's spikes, and discovered that he was extremely poisonous. She discovered that the orphans had a lower incidence of illness than other humans, as their physiology had been accepting of their mutations and changed the body to accommodate it. Desiring to encourage a similar resistance in non-mutated humans, Bethan started testing by infecting Finia - who had volunteered to help - under controlled conditions with a disease from a plague ship in the Scythe, from which she had obtained a sample by paddling out in a disease resistant suit with the assistance of one of her portmaster friend's ships.

Despite strict safety measures, Finia - who Bethan later suspected had developed Daemonheim syndrome - broke out of the quarantine in order to join the Blazing Lanterns, and the disease soon spread to the other orphans, who started dying, as the disease had mutated and learned to hurdle their natural disease resistance. Bethan suspected that the spread was not an accident, and with the assistance of the portmaster, she was able to procure a rare flower called the acralis - which acted as a cure to the disease - from The Bowl region. After curing the orphans, she burnt all of her plague samples to prevent another outbreak.

Bethan and the portmaster were successful in repelling the attack, managing to sink two out of the three ships, although Finia was able to escape on the remaining ship. After the attack, Bethan put the book she was writing on hiatus and stayed behind on Hyu-Ji in order to continue to help and learn more from the orphans.

Attack by the Pirates, Soothsayers and Purists

The following takes place during Hull Down on the Horizon, A Concerted Effort, and The Defiance of Hyu-Ji.

Some time after the earlier attacks of the Lost Men, the Blazing Lanterns and the Purists, Marcus, Bethan and Tomlin heard rumours of yet another attack on the island, and brought the information to the portmaster. However, they had conflicting information onto who exactly was planning the attack: Tomlin believed it to be an attack by the Purists, Bethan believed it to be the Pirates, and Marcus believed it to be a rogue group of Soothsayers. Faced with the conflicting information, the portmaster suggested that Marcus, as a Khan do something to see which stories were true, and Marcus went to the Council of Khans on Flou Tar-Shei to learn which, if any, of them was actually planning an attack.

After visiting the council, Marcus learnt that all three of them were planning an attack on the island, and brought this information back to Bethan, Tomlin and the portmaster. Bethan surmised that it couldn't be a coincidence, and that they might all be working together, which Marcus agreed was likely, with the pirates wanting to take the island, the purists wishing to kill the orphans, and the soothsayers wishing to harvest their organs.

Together, the four formed a plan on how to repel the invaders. Marcus noted that the town was made of wood, and thus susceptible to burning, and that there were seven or eight beaches for the enemy to land on. In response, Tomlin brought up that the church they had built was built solid, and thus would make a strong-fall back point, and pointed out that he had added some oil-cauldrons to the roof. Marcus had taught the orphans fencing with swords, and thus would be able to somewhat defend themselves from the pirates, Tomlin had armed 10 of his church guards with maces, and Bethan suggested that they use explosives, and headed off to the mines of Hanto to get supplies for them. While Bethan was getting supplies from Hanto, Marcus and Tomlin prepared the island for the forthcoming attack, and Bethan soon returned with lots of explosive supplies.

Soon after, they began their attack, with the soothsayers on the purist ship, and the pirates circling in schooners. Tomlin, remembering that Brother Jered was coming to Hyu-Ji to inspect the church with ten White Knights, requested that the portmaster pick them up on their ships way to Hyu-Ji. With the assistance of the White Knights, Bethan, Tomlin, Marcus and the orphans were able to repel the invasion.

As a result of their actions, Hyu-Ji now flourishes, with Marcus' advisors now effectively running the place for him, and the orphans are now performing their own experiments and sermons.

Retrieved from "https://runescape.fandom.com/wiki/Hyu-Ji?oldid=21886700"
Community content is available under CC-BY-SA unless otherwise noted.