Start a Wiki
This article is about the removed character. For the audio developer, see Iain Hetherington.

He seems to have travelled some distance. 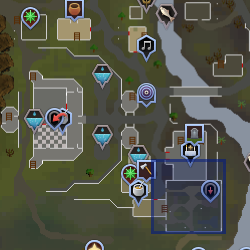 Iain was a religious pilgrim from the Asgarnian capital city of Falador. He was visiting Lumbridge, but was removed on 17 September 2009.

Iain was added on 1 July 2008, along with the RuneScape graphical rework. Originally he could not be spoken to, but was later given chat and work options. He could be found at the graveyard in Lumbridge.

Iain was born in Asgarnia's bustling capital city, Falador. His ancestry, however, goes back to Lumbridge, where his grandparents are buried. He spent most of his life in Falador, where he feels the bustling city life, though entertaining, distracted him from his worship of Saradomin.

Recently, Iain decided to travel to Paterdomus, a religiously significant Saradominist temple located on the River Salve near Morytania. Here he hoped to learn from the local priests. Unbeknownst to Iain, however, the temple recently fell to a group of Zamorakian monks, who desecrated the temple and left nearly the entire priesthood dead.

Since beginning his pilgrimage in Falador, Iain has travelled further south, to southern Misthalin. Here he is visiting his deceased grandparents, who are buried in Lumbridge Church's cemetery. He is enjoying the quiet life of Lumbridge, which is very different from Falador.

Iain's pilgrimage was temporarily halted when Lumbridge was placed under quarantine by the nation's government. A dragon of unknown origin awoke in a cavern beneath the town, leaving the Lumbridge Guardsmen no choice but to barricade any road entrance to the area. To worsen matters, the graveyard was outside the barriers, leaving Iain unable to visit his deceased grandparents. The White Knight Sir Vant and an adventurer ally eventually managed to force the dragon back underground, ending the crisis and allowing Iain to continue.

From 14 July 2008 until his removal, players could get work from Iain and other residents of Lumbridge.

Retrieved from "https://runescape.fandom.com/wiki/Iain?oldid=24921641"
Community content is available under CC-BY-SA unless otherwise noted.