An ancient staff, formerly the property of Iban. 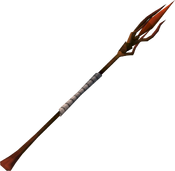 Iban's staff is obtained by defeating the evil mage Iban in the Underground Pass quest and requires 50 Magic to wield. Its stats are typical of a mid-range staff, being on par with the lunar staff. It does not provide unlimited runes of any kind. It does, however, have a special attack known as Iban Blast, which deals 100-250% spell damage, and drains 25% adrenaline or special attack energy. It can be chained together up to four times in a row to deal a devastating amount of damage.

Killing a Diciple of Iban while weilding the staff is required to complete an easy task in the Tirannwn task set. It is highly recommended to complete this task first if a player plans to alchemize or discard the staff.

Before the Evolution of Combat, Iban's staff could be used like any magic staff to cast attack spells and has the autocast for these spells. Iban's staff was needed to cast the Iban Blast spell, and was also able to autocast that spell. The staff had 120 charges in which to cast Iban Blast. Once the charges were exhausted, the staff couldn't cast Iban Blast but could still be used as a magic staff for other spells. One charge was used when the staff was used to blast an NPC with Iban Blast, and two charges were used when the staff is used to blast a player.

The staff could be recharged fully at the Flames of Zamorak well at the third level in the Underground Pass dungeon by using the staff on the well to recharge it. There are three practical routes to get to the well:

The Isafdar entrance is the much faster route but to use it requires, in addition to the Underground Pass quest, the Regicide quest. Also, the Isafdar entrance itself can be reached quickly by first teleporting to Lletya, but this requires a teleport crystal and thus the partial completion of the Mourning's Ends Part I quest.

Retrieved from "https://runescape.fandom.com/wiki/Iban%27s_staff?oldid=12076994"
Community content is available under CC-BY-SA unless otherwise noted.