Start a Wiki
OSWP
This article is about the iceberg featured in the penguin quest series. For other icebergs, see Iceberg (disambiguation).
[view] • [talk]

The Iceberg is a large piece of ice floating in the sea, and serves as a major location for the quests Cold War and Hunt for Red Raktuber. It appears to be almost devoid of features, with the only two icons on the world map being "transportation" (

). While currently, this is the closest location to a "penguin base", it is not their mainland. It is discovered in Hunt for Red Raktuber that penguins have a mainland which they refer to as the "Motherland". The Iceberg was discovered and instated as KGP HQ by the leader of the penguins, The Pescallion, who made one of his sons, Pescaling Pax, head of research and development there. Not all parts of the headquarters can be seen, as there apparently is a prison, one of the prisoners being Captain Marlin.

The transport icon marks the landing point of the boat from Rellekka, which is the only way to travel to the Iceberg. The Agility icon marks the location of the penguin agility course.

The northern tip of the western peninsula of the Iceberg is currently the farthest northern accessible point in the whole of Gielinor (not including Braindeath Island). 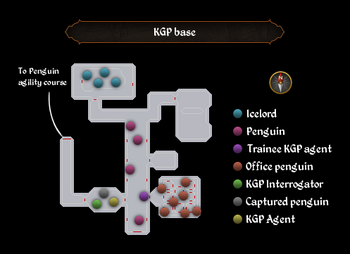 Much of the iceberg has been hollowed out for use as a base of operations by the KGP, though players must have progressed through part of Cold War in order to access this area. Players will meet NPCs including Pescaling Pax here. Pescaling is the leader of the penguins, and is leading them to war against RuneScape. The Iceberg appears to have stopped drifting with the Northern Sea's tides at some point, possibly anchored to the sea floor in some way by the KGP.

Players will also meet Ping & Pong, two musical bards who are annoyed with most instruments which require thumbs and fingers to play. During Cold War, players give them some bongos and a cowbell. Because of this, they are nearly thrown into solitary confinement for disrupting the base's operations. During Hunt for the Red Raktuber, players get the help of the bards in composing a song to put a guard to sleep.

During Hunt for the Red Raktuber, players meet some dwarves who claim to be working against the penguins. However, the player is tricked as they are working with the penguins. The dwarves are in the war room, and are possibly aligned with the Red Axe.

The only monsters here are four level 51 Icelords, which player must fight during Cold War. These can be fought after the quest is finished.

This course requires an Agility level of 30, and requires the completion of Cold War. Player also need to be wearing a penguin suit (created during the quest).

This course offers some of the best Agility experience in the game. Players with low life points may find this course useful as minimal damage is received upon failure, despite giving similar experience to the Werewolf Agility Course, but with half the Agility requirement.

Players with Ava's alerter may find a elite clue scroll near the giant ice column northwest of the boat. A spade is needed to dig it up. This is one of four possible locations where a hidden elite clue scroll can be found: the others are Lunar Isle, Isafdar, and Meiyerditch. Players should note that they can obtain only one of these clue scrolls, and the place varies from player to player.

The army of penguins

The entrance of the KGP HQ

Prototypes of penguin submarines and ammunition

The KGP's snowmaker, a mysterious rock and a lounge

The devices providing the T.A.R.D.I.S. with power
Click an image to enlarge

Retrieved from "https://runescape.fandom.com/wiki/Iceberg?oldid=22212420"
Community content is available under CC-BY-SA unless otherwise noted.