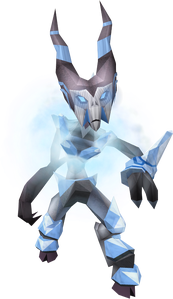 An Icefiend is a monster found on top of Ice Mountain. During Recipe for Disaster players must kill one of these to cool down the Rock cake but players can also do this with the Ice gloves. Icefiends may be assigned as a Slayer assignment from a Slayer Master. During the quest Perils of Ice Mountain, the player is assigned to capture baby icefiends for a gnome named Professor Arblenap, who is trying to save them from extinction. The icefiends' examine text says "The icefiend seems to be melting" during the quest Perils of Ice Mountain.

Level 84 versions can be found in the God Wars Dungeon and the level 107 versions are found within Ghorrock Fortress after completing The Temple at Senntisten. They generally hit higher than other monsters of their combat level. Icefiends commonly drop Water talismans, which are used in the Summoning skill to create Geyser titan pouches, or within the Runecrafting skill, to enter the water ruins.

Retrieved from "https://runescape.fandom.com/wiki/Icefiend?oldid=23120270"
Community content is available under CC-BY-SA unless otherwise noted.