A citizen of Al Kharid 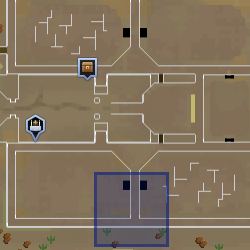 Ima is one of the people observing the fights at the Duel Arena. He says few lines with some importance though usually just random chitchat. He also walks around Dalal.

Ima's biography is based on what Ima says, in here must be noted that every other spectator of the duels in Duel Arena says exactly the same lines.

Ima was born sometime during the Fifth Age presumably in Al Kharid.

Ima has had a son, so it can be presumed that he has a wife or a girlfriend. This son recently won his first fight at the Duel Arena and "ripped his opponent in two pieces". Ima's son is fifteen, which the players say is young for a person to fight.

He tells players a humorous limerick of one of his duels with a man from Entrana:

"I once duelled a man from Entrana,
Who wielded a mighty katana,
It caused me fright,
But it lost him the fight,
It was made not from steel but banana!"

His favourite fighter appears to be Mubariz.

Retrieved from "https://runescape.fandom.com/wiki/Ima?oldid=24562595"
Community content is available under CC-BY-SA unless otherwise noted.