Imps are small demonic creatures, being the weakest of all the attackable demons. Though demons, Holy water is not effective. They are affected by the powers of Silverlight and Darklight.[1]

An imp may defend itself from a player's attack by disappearing in a puff of smoke and teleporting to a random nearby place. If the player can reach the spot where the imp teleported, the player will auto-path, automatically walking to the location of the imp to continue the fight, provided they do not click anywhere else on the map. Imps occasionally teleport even when they are not under attack. An imp, upon receiving damage, may also retreat from the player but not teleport. Imps have the ability to teleport themselves into areas that players cannot reach. It may also teleport as it dies, making the drop appear elsewhere.

Within the God Wars Dungeon, imps have a slightly different appearance, sporting goatees, longer horns and their skin is a deeper shade of red. Imps are loyal followers of Zamorak and will not be aggressive towards the player if they wear a Zamorakian item or have a Zamorak hawk follower out. They are rarely attacked by other monsters. Because of their low level and life points, killing imps is a fast way of increasing one's kill count in order to enter the Zamorakian boss room.

Imps are decent monsters to kill for low combat level players. They have 200 Life points each, which grants 26.7 experience to combat skills, along with 8.8 Constitution experience. Even though these also drop fairly good items for their level (among which Imphide), they are not recommended for training, as there are few of them scattered all over Gielinor and they have the ability to teleport.

The majority of imps' drops are worth little to higher-level players, and are often of little or no interest to them, except for beads that can sell for over 4,000 coins each due to their use in magic potions.

Imps are one of the 'races' who have lesser champions in the Champions' Challenge Distraction and Diversion. To fight the Imp Champion, the player must kill imps until one drops a Champion's scroll, a very rare drop. The champion scroll drop rate is not affected by the ring of wealth, as it is not on the standard or rare drop table of the imp. When the drop is received it will be a "third drop," for example, an imp hide, impious ashes, hammer, and champion scroll will all be received in the same drop.

Players with level 25 Dungeoneering can access the Karamja Volcano Resource Dungeon, which has numerous imps. Although lesser demons are found here, they will not attack the player while they are attacking imps alone. This spot is extremely effective for using a dwarf multicannon and will allow the player to combine getting the imp champion scroll with getting the lesser demon champion scroll. Finally, the north east corner of the Grand Exchange may be an option for players who don't want to be attacked by too many monsters at once.

Players with the Royale dwarf multicannon, Ardougne cloak 1+, and a Hoardstalker ring can place the cannon at the Ardougne Monastery, then use the ring to teleport to the Karamja Volcano Resource Dungeon to kill more imps. Since the scroll is broadcasted on chat, players can simply teleport between the spots when said scroll drops. They still need to refill the cannon once every 10-20 minutes, however.

Once the scroll is obtained, however, the fight with the Imp Champion is considered the easiest champion match by most players, because this champion has the lowest life points of all the champions. Interestingly, the imp champion uses the teleporting ability of the imps to great effect, rapidly teleporting all over the field and attacking with ranged. Players are advised to use ranged or magic for this fight.

The banner carrier that carries your banner when you have defeated any champion is, itself, an imp.

At level 71 Hunter, players may hunt imps with magic boxes. Beads may be used as bait. Success yield imp-in-a-box which could be used to bank two items, after which it is reverted to a magic box.

The Karamja Volcano resource dungeon is the best location to hunt them by far due to high concentration of imps. One can take gold out of their Money Pouch to bank the imps, allowing the player to hunt continually.

For low levels, the south entrance of Falador may be a good idea. Players could kill or pickpocket from guards while waiting for imps to trigger the boxes.

Note: Imps are not a good way to train Hunter as they cannot be released until 2 items/stacks have been banked, making this a fairly slow method of training. A way to speed training up is to bank full imp boxes with other imp boxes while catching them, this frees up one imp box for every three imps caught. Another method to speed up training is by using a snow globe to create snowballs, and then using the imps to bank the snowballs. This however leaves many snowballs in the bank which take time to destroy. Other similar methods involve fletching bolts and using an albino rat and scrolls to create cheese.

A player shaking an imp to obtain a bauble 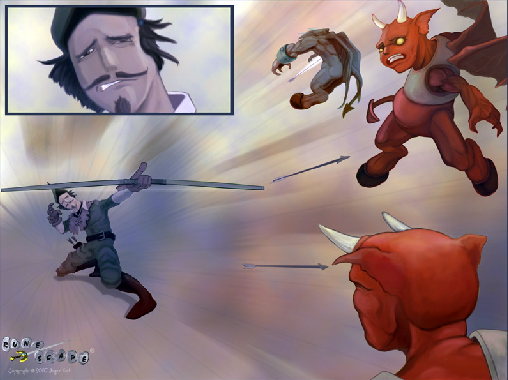