Impetuous Impulses is a solo minigame in which the objective is to capture implings, flying imp-like creatures that have been stealing trinkets and treasures all over RuneScape. Players begin the game by speaking with Elnock Inquisitor. The game works in two different ways: The player can either track the Implings to their home world of Puro-Puro, via crop circle portals and can capture them in a mystical wheat field, or can search for them throughout RuneScape. For greater success in this minigame a combination of high Hunter, Strength, Agility, and Thieving is a must.

Players having a Magic box in their inventory will be denied entrance to the minigame; instead, a message will appear in a chatbox: "Something prevents you from entering. You think the portal is offended by your imp boxes. They are not popular on imp and impling planes."

In a Developers' Blog by Mod Maylea on 28 October 2009, it was suggested that Impeteuous Impulses was going to receive an update in the near future. This proved true with the Impetuous Impulses update on 22 February 2010, which saw the release of three new implings (Spirit, Zombie, and Kingly) and more experience for catching implings.

A player teleporting using the crop circle in Zanaris.

To access Puro-Puro, the player can either go through a stable portal in Zanaris (in the middle of the wheat field), or random portals in wheat fields around RuneScape. Players can talk to the Wandering impling next to the stable portal in Zanaris, who will show the player the location of the current random portal through a cinematic overview, but will not say where they are. The random portals change location every 30 minutes. Players can then give this information to other players who do not have access to Zanaris.

If a player enters Puro-Puro through the random portal, they will receive a Farmer's affinity bonus, allowing them to more quickly push through wheat for the next 30 minutes. These portals are used by implings to leave Puro-Puro and enter Gielinor, however after leaving the portal, the implings have an extremely large wander radius and can fly almost anywhere, even over water and other places where players themselves cannot walk.

You do not need any equipment to start playing Impetuous Impulses, as it is all supplied by Elnock Inquisitor. The impling jars that he gives you are special; you cannot use butterfly jars to hold implings. Use of a Magic butterfly net may help too.

After running out of jars, buy or make one. Then fill that with a random imp, trade the gnome and swap it for 3 jars. Do that again until you have 6 jars and then catch the required imps for a jar generator. The jar generator gives 33 jars before it runs out. Make sure you save some though to get another.

Although time-consuming, players can make their own impling jars from butterfly jars. This is helpful if you run out of jars before you return to Puro Puro to trade Elnock. You can make it using anchovy oil, some flowers, and the lamp oil still, at the Chemist in Rimmington.

Strength boosts will also be helpful, as the increased strength will help you get through the wheat field faster. 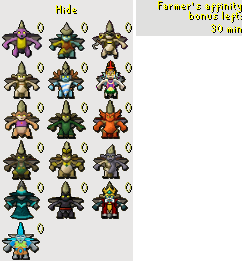 The easier of the two options is catching the implings on their home world: Puro-Puro. The player can either travel through a stable portal on Zanaris, or randomly appearing portals in wheat fields. Those who have access to Zanaris can talk to the Wandering impling near the crop circle to see where the random crop circle is located at that time. Once in Puro-Puro talk to Elnock Inquisitor, who will give the player a run down of the game, the maze and the implings. He will also give the player a butterfly net, some magical impling jars and an Impling scroll containing the number of implings the player has caught. There is no time limit for this minigame.

The maze is made of magical wheat. To enter the maze the player needs to select Push-through magical wheat which will, depending on the player's Strength level, take a long or short time to enter the maze. The minimap, due to the magical nature of Puro-Puro, will not display anything. Also the maze is constantly changing, new walls and passages appearing every few minutes. There is also a glitch, when a player uses a teleport to get out, the map will flash for around a second and then switch to the teleport location. This has yet to be fixed.

The Farmer's affinity bonus is a blessing that can allow faster movement through wheat. One must enter a "swirl" or teleportal in a wheat field, that occurs randomly. To receive a hint about which wheat fields give the bonus at the moment, click on check-gates on the Wandering Impling in the southern part of the Zanaris wheat field. Even when active, the bonus to movement speed may fail, in which case the player is informed that moving through the wheat is "hard work." This bonus lasts for 30 minutes upon entering Puro-Puro via a crop circle from a wheat field in Gielinor. The timer continues to run after leaving Puro-Puro, so it is possible to enter a crop circle to get the bonus, leave, then re-enter via the Zanaris wheatfield and benefit from whatever bonus time remains. The bonus was added to the game on 22 February 2010 with the update to Impetuous Impulses.

Capturing implings requires an empty impling jar in the inventory and a butterfly net (normal or magical) in the player's hand. The player clicks on the Implings, which, depending on the Hunter level, will be easy or hard to catch. The player can either claim a reward from the captured Impling by clicking on the jar, in which the grateful Impling will leave an item behind, or can trade the Implings with Elnock for minigame rewards, like more Impling jars. Note:The Imps feel some kinship towards the Implings and an Impling defender will try to free the lowest levelled of their captured brethren, though a high Thieving level will decrease their chances at freeing them. Carrying a jar containing an unwanted baby impling protects against the rescue of higher levelled implings. The player can leave at any time via the crop circle in the centre of the maze.

The implings are also scattered throughout RuneScape; however due to the size of RuneScape, they will be harder to find. The player cannot access Elnock, but it does not matter because no net/jars are needed here. This is because the travel across Gielinor has made them tired. Without a net and jar you do not get the impling itself, but the loot. Please note catching implings bare-handed will have a lower success rate.

Implings in RuneScape have a large wandering area, but generally have certain areas where they are located. For an example, one can be found in the forest south of Camelot. Outside Puro-Puro, the chance of encountering the Magpie impling, Ninja impling or Dragon impling is higher.

Impetuous Impulses is a popular method of making money for high level Hunters. Therefore, it will often be crowded when the number of players online reaches its peak, from approximately 21:00 to 03:00 UTC on weekdays at most times on weekends. Although Impetuous Impulses will still be profitable during these times, it will be extremely profitable late at night and very early in the morning as there will be much less competition. It is advisable to play during off-peak hours if possible.

When hunting high level implings it is recommended to pan the camera all the way down and walk around the maze on the third path from the wall. This allows players to view implings near the outer wall and closer to the middle. When you reach the corner of the path, turn the camera 90 degrees and continue.

When playing you will want to maximise your run energy. Wearing weight-reducing items such as a spottier cape, boots of lightness, and Penance gloves is recommended. Energy can also be restored with energy potions or other items such as strange fruit or an Explorer's ring. The salt-water bath at the Spa in Oo'glog will provide unlimited run energy for a short period of time (between 10 and 15 minutes), however, this requires completion of the As a First Resort quest. Rest can be used to regain energy quickly if necessary. Increasing your Agility level will cause your run energy to decrease at a slower rate and recharge at a faster rate.

Hunters may also want to use the Bind, Snare, and Entangle spells depending on their Magic level to hold implings in place. Used properly, these spells can prevent extended chases of difficult-to-catch implings. Remember that once released from one of these spells the impling will gain a brief immunity to them before they can be recast.

Before the update, one impling could be caught by 2 players if they catch it at the same time. However, now it is nearly impossible. If you would like to attempt this with a friend, it is recommended that you bind the impling in place to ensure that you can both catch it.

There are two viable strategies which can be used for Impetuous Impulses. Both will allow for profit rates of over a million coins per hour at a Hunter level of 83 or higher. The most important thing to remember when playing Impetuous Impulses is that it is a largely luck-based minigame, and you shouldn't be frustrated by extended dry spells.

This is a strategy for finding and catching Dragon or Kingly implings by remaining on the same server for an extended period of time. This strategy rests on the fact that when certain implings are caught, they cause equal or higher level implings to spawn, leading to high profits.

Players may wish to go to Puro-Puro with a friend so that they can clear out the Nature, Magpie and Pirate implings more quickly and then, with practice, they both catch a Dragon impling.

This strategy requires a good deal of patience but can be highly rewarding if utilised properly.

This strategy is simpler and easier to use successfully than the single world strategy, but can be ineffective if other worlds are crowded.

Most players utilise this strategy because it allows for multiple Dragon or Kingly implings to be found within a short period of time (if you are very lucky). During late night and early morning hours this can be very profitable as high level implings will have been allowed to spawn for hours with far fewer hunters chasing them.

There is no particular strategy behind which world you log into - both nearly empty and nearly full worlds will often have other hunters in them. Remember that other hunters will often look for nearly empty worlds under the impression that no one else will be in them. To make things easier, you may want to sort the world list by type, so that all the members' worlds are together, and then go down the list one-by-one.

After capturing several implings the player can trade the implings with Elnock. Jars aside different Impling combinations will grant the player different items that will increase their success in this minigame.

The player can also loot captured implings, rather than trade with Elnock. Different implings carry different items, from minor trinkets to powerful treasures, like dragon arrowtips.

The following music is unlocked with this minigame:

Retrieved from "https://runescape.fandom.com/wiki/Impetuous_Impulses?oldid=21014294"
Community content is available under CC-BY-SA unless otherwise noted.