View source
watch 02:56
Raise a Floppa - The Loop
Do you like this video?
Play Sound
This article is about the Invention skill. For information on training Invention, see Invention training.
Not to be confused with Inventory.
[view] • [talk]

Invention is an elite skill which allows players to disassemble items and obtain new materials. These can be used to manufacture newly discovered devices and augment a variety of high-level weapons, armour, and tools, enhancing them with perks. Invention is RuneScape's 27th skill, as well as the first elite skill. Levels 80 Divination, Crafting, and Smithing are required to access this skill.

Players can start by going through a tutorial for Invention by speaking to Doc at the Invention Guild, north-east of the Falador lodestone. While working on the Invention skill, players help to develop the guild.[2] During the tutorial the player's tool belt is upgraded to include a charge pack, material pouch, and inventor's tools.

In addition to the Invention Guild, there are six other Inventor's workbenches around Gielinor:

There are three basic ways to train Invention, with the method of choice applied right after you complete the tutorial:

Between the skill's release and 25 July 2016 there was an Invention amnesty where players could not gain direct or bonus experience in Invention from sources such as experience lamps, stars, books, the Jack of trades aura, and Distractions and Diversions.

Lamps and stars from Treasure Hunter are an exception, and they grant much more experience to Invention than to any other skill. The formula is unknown, but the Invention experience at level 43 or above surpasses experience for other skills even at the maximum of 98+.

While levelling Invention players are able to pursue specialisations by choosing different tech trees. The type of tech tree that the player selects determines what items can be unlocked and manufactured first, by providing different sets of blueprints. Invention features 3 tech trees. All players use the basic human tech tree when they begin training the skill. Once the player reaches level 40 they are given the option to specialise in either the cave goblin tech tree or dwarven tech tree.

At an Inventor's workbench, using their current blueprints, the player can discover new materials, devices, and machines in a process called discovery.[3] Unlocking a new device or material will give a one time chunk of experience after which the player will be able to build and use the device or material.

The discovery process involves a micropuzzle where the player arranges modules to optimise the experience earned for their discovery. The process indicates how well optimised the modules are, with each optimisation level providing additional XP. At the least optimised "Poor" level, no additional XP is awarded. Satisfactory awards +100%, Good +200%, Excellent +300%, and Perfect +400% (effectively five-times the base XP). The ideal order of modules is random for each player.

The solution for each puzzle remains the same for each player. Therefore if you use an Invention potion to boost your level, but it drops before you finish, take a screen shot of the puzzle solution. Then when you boost again, you can solve it using the saved solution.

Prior to an update on 18 September 2017, discovery required the use of Inspiration.

Players are able to break down items (including noted stacks) by dragging them into their Invention pouch, which is located in the inventory interface, next to the bond pouch, or by using the Disassemble ability from their spellbook.[4] This gives a small amount of Invention experience and produces materials. Each item also has a junk chance, dependent on its tier.[1]

The materials produced are a mixture of common materials, called parts, and rarer materials, called components. Components have more powerful applications than parts.[2] Some specific components are only obtainable from particular items. Players are able to obtain materials even if they do not have the Invention level required to use them. It is possible for an item to give up to 12 standard components as well as up to 7 rare components upon being dismantled. The number of materials given will depend on the value, nature and size of the item dismantled.[1]

Players are able to augment certain tools, weapons, shields, torso-, and leg-slot armours. To do so, one must first build and apply an augmentor to an item. The augmented item can then have a gizmo with perks applied to it and be levelled up. Augmenting an item will make it untradeable and you will not be able to return an item to its original tradeable version without using an Augmentation dissolver.

Perks are mechanical effects that may be positive or negative. Some perks are new, though most are generally already found elsewhere in the game. For example, the occasional damage reduction effect of Warpriest of Saradomin armour can be granted by a perk, though it is less effective than this armour's effect (equivalent to wearing around 3 pieces of the set).[2]

To create perks, a player must craft and fill a gizmo shell with materials. Each gizmo shell has 5 slots that can be filled. After filling the gizmo shell, the player will be able to choose which perks they wish to make out of the range of possible perks that can be made from the materials inserted. Gizmos can be socketed onto an augmented item to impart its perks to that item. Creating a gizmo will grant Invention experience for each material that is used up. Using rarer materials grants more experience.[2]

Each material may produce a variety of perks. Additionally, perks may be of different tiers – up to 5 ranks for certain perks[5] – and materials are weighted in their likelihood of making different levels of a given perk. Materials are balanced so that adding the same material to all 5 slots of a gizmo shell will result in the creation of 1 slightly negative perk and 1 slightly positive perk; therefore, players will need use a mixture of different materials – aiming to leverage the positive effects of each and avoid the negatives of each – in order to create a gizmo with a net-positive effect.[2] The term "prototyping" refers to this process of trying to create useful gizmos from experimenting with different combinations of perks.

Once an item has been augmented it will gain experience and advance levels when it is used in combat. Levelling an item increases the experience and materials received when disassembling it. The maximum level achievable is dependent on research.

An augmented item receives a proportion of the base combat experience that the player earns when killing a monster. The base value, which applies to armour and main-hand weapons, is 4%; two-handed weapons gain 50% more for 6% total, and off-hand weapons gain half as much for 2% total. Killing players does not increase the gear's experience.

Levelling a piece of equipment from level 1–10 increases the amount of stored Invention experience that is contained within it each time that its level increases. Although items can be levelled up to a maximum of level 20 at 99 Invention, the maximum amount of experience that can be earned from an item caps at level 10, with equipment siphons requiring level 12 to get the same amount.

There are two options when claiming the experience from augmented items:

Any augmented equipment that has the same level will give the same amount of Invention experience when disassembled. However, it should be faster to level higher tier equipment as equipment's experience gains are dependent on the amount of combat experience earned by the player. Additionally the rate of levelling will be balanced by number of slots; so a two handed weapon will level twice as fast as a one handed weapon and as fast as dual wielded weapons.

The following table is based on tier 80 equipment.

Materials can also be used to create an array of different devices, each with its own use or effect. Some devices are used specifically as part of the invention skill, while others have purposes related to various other skills.

Machines, released as part of Invention Batch II, are built using Construction-like hotspots in the back of the Invention Guild. The first machine built is a power generator, which when powered up with divine charges provides a power source for the other machines, including the alchemiser, auto disassembler, plank maker, partial potion producer, and the automatic hide tanner. Machines are used to automate certain tasks, which are carried out even when the player is offline. Up to six devices can be built (including duplicates, but not including the generator) and each device has two tiers.[6] To invent machines, players must have level 60 Invention.

Invention was originally planned to have a different experience-per-level relationship to previous skills, with the skill being slower to level at lower levels. It was mentioned that the new halfway to 99 level would have been level 77 and not 92. The maximum virtual level for this skill would have been level 150.

However, in a Developer Q&A it was announced that the previously planned experience curve had been abandoned, due to play testers finding the "flatter" experience curve dissatisfying. As a result, Invention now has a more "traditional curve".[7] Level 84 is halfway to 99 (as opposed to level 92 in other skills). Invention is a little slower to progress at early levels compared to other skills, but faster to level at higher levels.[1]

Unlike other skills, the major aspects of Invention are available from level 1, with higher levels unlocking extras such as rarer materials and passive upgrades.[8]

Invention, along with Divination, was first mentioned by Mod Mark in the fourth live Q&A session. One, Divination, would be a gathering skill like Mining and Woodcutting. The other, Invention, would be a production skill like Crafting. In a November 2012 Behind the Scenes, the new skills were described as "designed to suit the old-school, yet complement the entire game" since they were modelled "on some of our oldest and dearest content." The August 2013 Behind the Scenes pushed the time for the second skill back to 2014.

During RuneFest 2013 the second skill was revealed to be the Invention skill.

At RuneFest 2014, it was mentioned that:

During RuneFest 2015, it was revealed that Invention would allow for perks to be added to items. During this RuneFest a total of 187 perks were shown in a presentation slide. Additionally, concept art from RuneFest 2015 suggested that Invention may include the ability for a player to become a guild master. The player could then be able to build machines and decorations in the guild, using a hotspot system similar to the one used in the player-owned houses system; build various workshops including cave goblin workshop, dwarven workshop, and human Divination workshop, and be able to employ people to work in the built workshops. The examples of NPCs who could potentially be hired included Oldak and Professor Oddenstein.

Examples of NPCs who the player may be able to employ

Plans for machines along with other tech trees were confirmed to be scrapped on RuneFest 2016. Instead, minor adjustments to the current way Invention is trained would be done every now and then.

Invention Batch II was released on 18 September 2017 to address unfinished parts of the skill by introducing new content, especially at higher levels, as well as introducing some quality of life improvements. New content includes the addition of machines to the skill, and 12 new devices. Some of the quality of life improvements included the removal of the Inspiration mechanic, tradeable augmentors, and a toggle for the display of cogs on augmented equipment.[11]

Like all skills, there is a skilling pet obtainable from training this skill. For the Invention skill, the pet is called Malcolm. 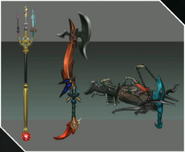 Concept art for a soul weapon

A list of augmentable items as shown during RuneFest 2015

Components example as shown during RuneFest 2015

A Saradomin godsword used as an example weapon as shown during RuneFest 2015. With the following perks: Enlightenment, Dragonslayer, Anti dragonfire, Reckless

A graph showing the planned level-experience relation for Invention as shown during RuneFest 2015. This has been modified later in development

Example items as shown during RuneFest 2015

Available perks as shown during RuneFest 2015

Factory machines as shown during RuneFest 2015.