Start a Wiki
OS
This article is about the platelegs version. For the plateskirt version, see Iron armour set (sk).

Iron armour set (lg) is an armour set requiring level 10 defence to equip and is from the Grand Exchange. It can only be made into a set by exchanging it with the Grand Exchange clerks. It contains an iron platebody, iron platelegs, iron full helm, and an iron kiteshield. It is the same as an iron armour set (sk), except this set has iron platelegs instead of an iron plateskirt. To turn the components of an armour set into a set crate, or from a crate to the components; right-click on a Grand Exchange clerk and then click sets to exchange the box for the armour, or vice-versa. To make an iron set with Smithing, a player will need 13 iron bars. Smithing the armour components from iron bars will grant 325 smithing experience.

Sets are commonly used to reduce the amount of bank space taken up, which is especially useful for free-to-play players. 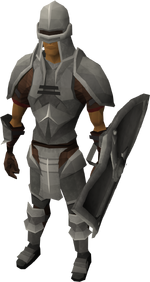 Retrieved from "https://runescape.fandom.com/wiki/Iron_armour_set_(lg)?oldid=24536412"
Community content is available under CC-BY-SA unless otherwise noted.