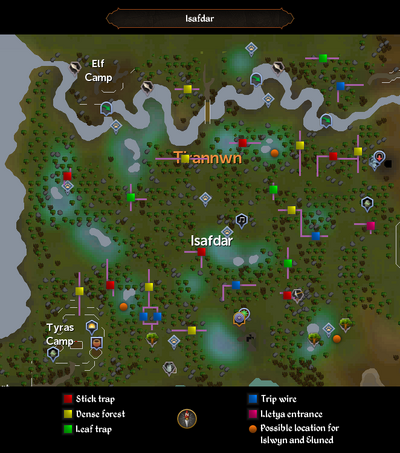 Isafdar (commonly pronounced "Iss-aff-daar", Elvish "Iss-av-daarr" with an alveolar trill[1]) is the elven forest. It is the largest part of the region Tirannwn. Isafdar is located on the very western edge of the continent of RuneScape. It is in Elven Lands, and is one of only four locations that they control at the time.

Isafdar is located just west of Lletya, and south of Prifddinas, the Elven City. It is reachable by the Underground Pass to the east, by Arandar to the northeast, and the Tirannwn lodestone in the southern part of the forest.

Isafdar is amongst the most difficult forests to get to in Gielinor. Since its creation in the First Age by Guthix, the forest has changed little. This can be attributed in no small way to its isolation. The lands north of the forest, past Prifddinas, are largely unexplored, with little to no information available on their nature. To the west is a vast nameless ocean, of which nothing is known. South of Isafdar are the Poison Wastes, a dangerous swamp filled with toxic gases and explosive chemical compounds that have been created secretly by the gnomes of Arposandra. And to the east, separating the forest from Kandarin, is a mountain range so vast that few have crossed it. Before the introduction of lodestones, there were only three ways of getting to Isafdar; across Arandar, through the Underground Pass, or by Charter ship to Port Tyras. Unfortunately, Arandar has long since been controlled by the Iorwerth Clan, and the Underground Pass which once allowed safe passage to Kandarin has recently been conquered by the Zamorakian lord Iban.

The forest has been inhabited for millennia by the elves, who arrived in Tirannwn through the World Gate during the First Age. Despite their long history in the forest, they have established only one permanent settlement; Prifddinas, the city of crystal. Other than this, only small camps and temporary villages have been created within the forest, such as Lletya, the Elf Camp, and the foreign Tyras Camp.

The elves, following their arrival in Gielinor, ruled much of the world. Many migrated under the protection of the Cadarn Clan. However, when the cataclysmic God Wars began in the Third Age, the elves retreated into Isafdar once more. In the Fourth Age, the elves expanded to take hold of the power vacuum in current Kandarin, the expedition was lead by the Cadarn. During the absence of the leader of the Cadarn, King Baxtorian, the traitorous Iorwerth Clan had seized Prifddinas.

Despite the elves' dire civil war that threatens the race's very existence, Isafdar has remained largely untouched. Trees thousands of years old cover the forest, and many species of rare creatures live within. The elves have continued to protect themselves from unexpected attacks by setting up traps that only the most agile can pass.

It has been suggested that many of Kandarin's forests (and perhaps others further afield) once appeared similarly to those of Isafdar. During the Eyes of Glouphrie quest, the area south of the Tree Gnome Stronghold where the Battle of Atarisundri takes place appears very similar to Isafdar.

Isafdar is blanketed with traps, from poison crossbows to pitfalls with spikes. If you are travelling through Isafdar, make sure that you thoroughly check where you're walking or you risk dying. The recommended Agility level to pass traps is 56 or higher (Summer pies or Agility potions are also recommended).

In addition to the traps, the forest is scattered with dire wolves, and grizzly bears. The dire wolves are usually found on the eastern and southern outskirts of the forest, and the bears usually travel in groups.

Towards the poison wastes and north-west of the mining area, you can find White berries which are used for defence potions and super defence potions. Farther in the wastes, there is swamp tar and a few scattered trees, though you risk being poisoned if you stay for more than a short while.

The fishing spots in the lakes of the forest contain fly fishing fish. At a spot at the south-east of the forest there are some magic trees, and the western area contains some Yew trees. There is also a mine with mithril ore and adamantite to the east as well. At the northern edge of the river, along the ocean, there is also a fishing spot where players can big net fish and harpoon for sharks. These fishing locations are not common simply because no bank exists nearby, except for a deposit box after the Deadliest Catch quest.

Towards the north-west of Isafdar is a small Elf Camp, which has a handful of elves, a loom, and a fire. Players might find it useful to catch their fish north-west of the camp and cook it on the fire as food to save bank trips.

Also unique to Isafdar are the Pawya and Grenwall creatures, which can be caught at level 66 and 77 Hunter, respectively.

A mushroom patch can be found south-west from the Tirannwn lodestone along with Trevelian, the elven tool leprechaun. This patch requires completion of the medium Tirannwn tasks to use it.

According to the Knowledge Base, the yew grove at the southern edge of the land is in the centre of the forest, thus implying that the poison wastes consuming it could reach much further south.

After one has completed the quest Do No Evil, they may use the Ava's alerter to find a crate containing an elite clue scroll in the clearing just west of the Underground Pass. A spade is needed to dig it up.

This is one of four possible locations where a hidden elite clue scroll can be found: the others are Lunar Isle, Meiyerditch, and the Iceberg. They can obtain only one of these clue scrolls, and the place varies from player to player.

Retrieved from "https://runescape.fandom.com/wiki/Isafdar?oldid=24309096"
Community content is available under CC-BY-SA unless otherwise noted.