Isla Anglerine is an island involved in Fish Flingers, a Distraction and Diversion related to the Fishing skill. The isle lies east of Barbarian Outpost and south of the Fossegrimen's altar south of Rellekka. It can only be visited during a Fish Flingers competition by talking to a Fisherman, who is located at most popular fishing spots.

There are multiple kinds of fish that can be caught here:

There is also a reward shop on the island (in the lobby) where players may turn in their Fish Flinger Tokens to get different rewards. The shop is available by talking to any Fisherman.

Players may purchase Tackle boxes, raw fish (though it would appear that one can only receive fish that they can catch at their Fishing level), and a Fishing outfit that increases Fishing experience (much like the Golden mining suit). 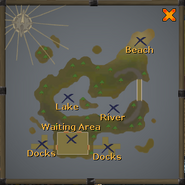 The locations of the fish on Isla Anglerine.
Click an image to enlarge
Retrieved from "https://runescape.fandom.com/wiki/Isla_Anglerine?oldid=19110785"
Community content is available under CC-BY-SA unless otherwise noted.