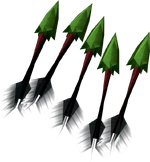 Enchanted jade bakriminel bolts have a 5% chance of triggering the Earth's Fury effect, which stuns the target for 4.8 seconds. In PvP, the bolts will bind instead.

Retrieved from "https://runescape.fandom.com/wiki/Jade_bakriminel_bolts_(e)?oldid=24561080"
Community content is available under CC-BY-SA unless otherwise noted.