The Jadinko Lair is a members-only area that was released on 12 July 2011. It can be accessed north of the Herblore Habitat in a dungeon entrance near Dotmatrix and Maverick. Here players can help the Jadinko Queen rid her lair of mutated jadinkos or cut down jade vines to create ranged weapons.

The lowest requirements to participate in various activities of the Jadinko Lair are 83 Fletching, 83 Firemaking, 83 Woodcutting, and 80 Slayer. The attackable mutated jadinkos within the lair range from levels 93 to 100.

* These items can be fletched outside of the Jadinko Lair, but require items that are collected or made in the lair.

Players can most quickly reach the Jadinko Lair by teleporting to the Herblore Habitat with a juju teleport spiritbag or witchdoctor mask, crossing the vine in the north, and running west to jump over the waterfall. The entrance to the Lair is northeast of the stepping stones over the waterfall. Another way to get there quickly is to travel to Shilo Village by either the Shilo Village cart system or karamja gloves 3/4, crossing over the broken cart in the south-eastern side of the village, and walking east towards the lair entrance. 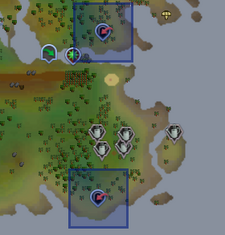 Another quick transportation method is to use a Charter ship to go to the Ship Yard and then run south-west to the Lair. One of the fastest ways to access a charter ship is to teleport to Brimhaven using a brimhaven tablet and then run north a short ways to the docks. The charter ship trip from Brimhaven to the Ship Yard costs 400 coins, or 200 coins after the Cabin Fever quest, and wearing a ring of charos will halve the cost of the trip. Take the magic pouch.

Players can also tune their directional portals to the Jadinko Lair in their garden in Prifddinas.

Just west of the Jadinko Queen in the Lair is a large jade vine root covered by small roots. A player can chop these roots away (Woodcutting level 40 required, grants 300 exp) to permanently open up a two-way tunnel to the surface, the upper end being in the south of the Herblore Habitat by the bank deposit box. This route cannot be opened from the surface, but once opened it allows access to the Lair from the surface and it provides a superior banking capability for Jadinko Lair drops that the player wants to keep. Players using juju teleport spiritbags or the witchdoctor mask teleport may find the tunnel a faster route than the main entrance in the north .

When going to the main entrance for the first time, players should speak to Dotmatrix to be able to enter the lair. If players attempt to go in without talking to him, he will tell you to talk with the explorer to learn more about the Lair.

The Jadinko Queen and various other jadinko workers live in the main chamber of the Lair. They protect the Queen from the mutated jadinkos, which spawn randomly in the other rooms from her roots without her control. If players help the Queen by defeating the mutated jadinkos or doing the various skilling activities within the Lair, they are rewarded with favour points, which can be used to purchase jadinko fruit, seeds, or juju teleport spiritbags at the offering stone. Supposedly, the jadinkos found on the surface at the Herblore Habitat bring down the seeds, fruits, and spiritbags to the offering stone. Players do not see them doing this very often, but the occasional Carrion or Normal Jadinkos can be seen walking to and from the altar.

Jadinkos are reptile-like plant creatures. This is most evident with the Queen, as she is attached to the jade vine. The jadinkos in the Queen's chamber can be neither attacked nor spoken to. 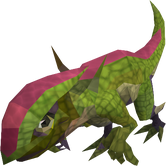 Mutated jadinkos are Slayer monsters assigned by Sumona, Duradel or Lapalok, Kuradal, and Morvran. There are 3 types of mutated jadinkos - requiring 80, 86 and 91 Slayer respectively. However, players may kill them without having them assigned as long as your slayer level is high enough. 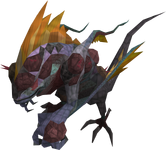 Players wishing to use ranged should wear appropriate armour such as Armadyl or dragonhide armour. Protection prayers, curses, and familiars will also be helpful as it is with players using melee, the use of Soul Split can enable the ranger to stay at Jadinkos for a period long over that which is offered by meleers, as the use of a safe spot prevents the Jadinkos from meleeing, reducing them to maging the ranger. Dwarf multicannons do not work here. When trying to setup a Dwarf Multicannon, players will get the message "It's far too damp down here to set up a cannon."

Mutated jadinkos drop many noted items in addition to special items that can only be obtained within the Lair. Mutated vines can be used with excrescence or sagaie shafts to create bolas and sagaie, respectively. Excrescence is only dropped by mutated jadinkos and cannot be created. Both these ranged weapons have an increased attack bonus when fighting mutated jadinkos. Jadinko fruits each have a special combat and skilling-enhancing abilities that can only be used in the Lair for short amounts of time. If the fruits are taken out of the Lair, they can be changed to common fruit by speaking to Papa Mambo. Fruits taken outside the Lair will have their effects removed and will act as common fruits that heal 1500 health. Mutated jadinko guards and males drop whip vines which can be attached to an abyssal whip to form an abyssal vine whip which has increased bonuses.

Hanging down like ribbons from the ceiling of the Jadinko Lair are vines known as jade roots. There are four types of jade root in the lair with which the player can interact: curly, straight, healthy, and mutated. In the Queen's chamber, however, the vines not immediately surrounding the Queen are non-interactive. Chopping jade vines produces fletching materials that can be combined to form two different ranging weapons. Note that it is possible to receive strange rocks from all 3 skills used on the jade vines, as well as golden rocks in woodcutting for harvesting them.

In the three mutated jadinkos' rooms are curly and straight roots. Both types are actually the same kind of plant, and they occasionally alternate from one type to the other. These can be chopped for Woodcutting experience (80.8 for cutting and 80.8 for collecting), requiring 83 Woodcutting. Players click a root once to chop it and then click again to collect four of that kind of root. It is advisable to hide NPC attack options in the combat settings since it is easy to misclick on a mutated jadinko and enter a fight.

Curly roots can be used on the circular dry patches between rooms to form fire pits, requiring 83 Firemaking. After a fire pit is formed, it can be refuelled by either using another curly root on it, or by clicking the fire pit to burn all of them in the style of adding logs to a bonfire. This was the only method of Firemaking experience that had a "burn all" option prior to the Bonfires update. Each root burned earns 378.7 Firemaking experience and adds 30 seconds of duration to the fire.

Straight roots can be burned on a fire pit (lit with a curly root) to form a Hardened straight root, which can used with a knife to make sagaie shafts. If a mutated vine (see below) is used on a sagaie shaft, the player will fletch sagaie, a special ranged weapon that is effective against mutated jadinkos.

Healthy and mutated jade roots dangle around the Jadinko Queen. Similar to the curly and straight roots, these frequently change form, alternating between healthy and mutated states, but chopping a healthy root will result in the player receiving small amounts of damage. Mutated roots can be chopped to acquire mutated vines. Mutated vines are then used with excrescences to make bolas and with sagaie shafts to make sagaie.

Doing activities within the lair will add to the player's favour. Killing mutated jadinkos yields favour points: 3 for babies, 7 for guards, and 10 for males. Cutting a mutated vine near the Jadinko Queen yields 2 favour points, but cutting a healthy vine will take away 1 point. Lighting a firepit earns 3 favour points, while adding a curly root to an already-burning firepit gives 2 points. A player can have a maximum of only 2,000 favour points before they stop accumulating.

Players can exchange their favour points at the offering stone in the Jadinko Queen's chamber for the following:

The seeds obtained at the offering stones will be the same types that are normally dropped by the jadinko that you currently have attracted at the hunter area on the surface. You will not obtain a seed type if the jadinkos on the surface do not drop that seed when caught. If you do not have specific jadinkos attracted on the surface, only blossom seeds can be found. Therefore, when you are ready to collect a reward, make sure you are attracting a jadinko with good seed drops, such as carrion jadinkos.

Retrieved from "https://runescape.fandom.com/wiki/Jadinko_Lair?oldid=24307662"
Community content is available under CC-BY-SA unless otherwise noted.