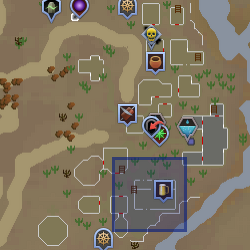 Jalal the Drunk is a man in The Asp & Snake Bar in Pollnivneach. Though rather drunk, he plays a small role in The Feud quest. If a beer is used on Jalal, he will take it and ramble drunkenly.

Community content is available under CC-BY-SA unless otherwise noted.
... more about "Jalal the Drunk"
RDF feed
Is members only
Yes +
Store location
Pollnivneach +