RuneScape Wiki
Register
Don't have an account?
Sign In
Advertisement
in: Quest NPCs, Gods, Heart of Stone,
and 3 more
English

Behold, the elder god Jas, whose arms crafted the world from clay. You feel disturbingly like an ant staring at the heel of a boot.

Echo of Jas, Voice of Jas

None
Jas is the oldest and most powerful of the Elder Gods, the ancient beings responsible for the creation of the universe, including Gielinor itself[1][2]. She is described by a TokHaar-Hok as "time, and so time passes. She is sand, and so there is desert."[3] It has been said that the Elder Gods do not specifically represent an element or aspect, but Jas is most aligned with progression and time, and also has an association with sand and air. In addition to the roles she played in shaping the universe, Jas is specifically responsible for creating almost all of the Elder Artefacts using the Stone of Jas, the first artefact and the one that "most purely expressed her power," and one that has played a prominent role in Gielinor's history.[2]

As Mah was thought stillborn, Jas created the Catalyst and the other artefacts to fill the gap Mah left. The Catalyst's purpose was effectively to duplicate Mah's power. Normally, the Elder Gods work together when creating planes. With Mah gone however, each Elder God started creating their own planes in an effort to learn the knowledge lost by Mah's absence, while also destroying the planes from the previous cycle. Jas, with the Stone in her possession, came upon the Dragonkin homeworld, and prepared to destroy it. The Dragonkin tried in vain to take and use the Stone against her. Jas, seeing that life desired power, bound the Dragonkin to the Stone, so that they would no longer desire it.[4]

The Elder Gods shaped many worlds throughout the universe, each time improving their designs with the assistance of the Elder Artefacts, including the Elder Kiln. After creating Gielinor, meant to be their final and most perfect creation, the Elder Gods "lay down upon their perfect world" and "[spoke] no more [to the TokHaar-Hok]." This suggests that the Elder Gods did not depart from Gielinor after creating it, but instead remain on it. Her Elder chronicle is found on the Ullek cliffs, suggesting that she is either underneath or is the Ullek cliffs.

In Heart of Stone the player visits the Ullek cliffs again, and meets with JasKra, Jas's mouthpiece, whom the adventurer convinces that he/she is not working with Xenia by displaying a series of memories to it proving this point. At the end of this quest, the Prehistoric abyssal declares that Jas, along with the other Elder Gods on Gielinor (Ful, Bik and Wen), is beginning to wake up.

During Kindred Spirits, the player sees a short memory of Sliske talking to a mysterious voice, later revealed to be Jas in Sliske's Endgame. The dialogue from Jas appears in orange here.

In Sliske's Endgame, Jas teleports the player to her. By the time the player wakes to their senses, Jas is hearing Zaros' pleas to be an Elder God. She refuses to let him be one, as while he is one of Mah's creations, he can never be an Elder God and also the fact that he cannot create life from nothing. After Zaros leaves, Seren follows along with him. Jas then focuses her attention on the player.

Jas was curious about life and made Sliske her agent on Gielinor. She asks why they killed him. After explaining their actions, Jas believes that mortal life is unexpected and dangerous. However, she shows interest in the player, and gives them an ultimatum: if they can prove that mortal life deserves to exist, they will leave Gielinor alone; if they are unworthy to live, they will destroy all mortal life. Jas allows the player to ask her one question before she teleports them back to the surface. 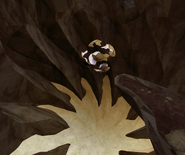 The egg from which Jas hatched