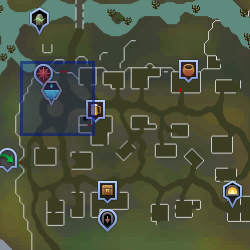 Jayene Kliyn is one of the people of Burgh de Rott who needs escorting to Paterdomus in Temple Trekking. She is a medium follower, with medium life points and combat stats. She is also a member of the Burgh de Rott militia, specialising in ranged combat.

Her basic equipment consists of a longbow made of an unknown type of wood with rune arrows for ammunition, and a Rambler's backpack. She does not seem to be wearing any armour.

By escorting Jayene on the trek, she will gain levels. She will unlock certain abilities as her level increases:

Jayene is fairly easy to train, especially at lower levels. She could get to level 20 in her first combat event, as long as she does most of the damage. The easiest way to train Jayene is to stand between her and melee monsters, and wait until she attacks it. That way, she will train the most, without getting hit.

Ghasts and nail beasts are the easiest to train her on. Swamp snakes can still be used but players should ensure their attention is on them at lower levels due to their new hard-hitting magic attacks. Note that while giant snails do very little damage on players, their ranged attacks hit far harder on followers and they can easily force Jayene to escape if not paying attention.

For Ghasts, the best way to train is to run back to the entrance of the event as soon as it starts. This traps the Ghasts on the trees and rocks, allowing Jayene to range the Ghasts without taking damage. You will also not take any damage. You can also do the same at the 'escape' path. This is effective for any followers who use Ranged or Magic, such as Pazuzu.

Retrieved from "https://runescape.fandom.com/wiki/Jayene_Kliyn?oldid=19296049"
Community content is available under CC-BY-SA unless otherwise noted.