Jekyll and Hyde was a random event before the 25 February 2009 update that reworked random events. Occasionally, the player would be approached by a man named Dr Jekyll who desperately begged for help, asking for the highest level clean herb that the player had; he asked for guam leaf if player had no herbs. In return, he would give the player a potion (see list). A player could choose not to help, then he would go find someone else to help him and the player received a strength potion (2).

If the player ignored him, he would transform into Mr Hyde (level 14-159, depending on the player's combat level), who fought with melee. When killed, he would drop a potion, similar to if he was given a herb. However, sometimes he dropped an empty vial. Killing him could sometimes be more profitable than giving him a herb, as he could possibly drop a super restore potion (4).

Since the update that retired the random event, Dr Jekyll will occasionally appear in Varrock square and run to the Apothecary.

The list, which potion Dr Jekyll gave for the herb:

*For Ranarr and above, the potion given is 1 level below the herb 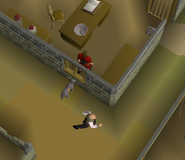 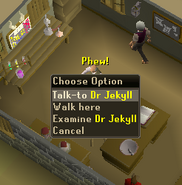 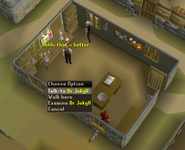 Retrieved from "https://runescape.fandom.com/wiki/Jekyll_and_Hyde?oldid=20851277"
Community content is available under CC-BY-SA unless otherwise noted.