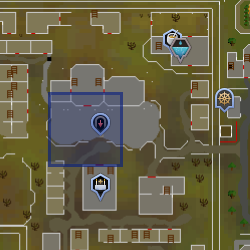 When Edmond hired an adventurer to sneak into West Ardougne via the Ardougne sewers to find his daughter Elena, he directed them to Jethick. Jethick was initially unable to help, but upon being shown a picture of Elena, he claimed she was staying with Ted Rehnison while she aided plague victims. He asked the adventurer to return a book about growing turnips that he had borrowed from the family.

When the adventurer began a revolution to remove the Mourners, he joined, wanting to tear down the walls surrounding the city. After King Lathas's deposition, he was happy to see increased visitation to West Ardougne, but didn't like the noise and disruption that this caused.[4]

Retrieved from "https://runescape.fandom.com/wiki/Jethick?oldid=24562645"
Community content is available under CC-BY-SA unless otherwise noted.