A young man with a dark and mysterious past. 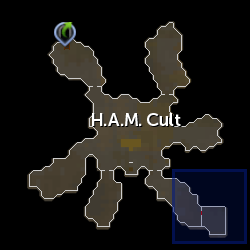 Jimmy the Chisel is an apprentice of Aggie the witch and a relation of Farmer Fred. He is located in the cell of the H.A.M. Dungeon where players are imprisoned when caught by H.A.M. cultists. He plays a minor role in the One Small Favour quest as well as the Death to the Dorgeshuun quest.

Unlike the player, Jimmy is being held in the prison as H.A.M. wants to convince him to join them, for reasons that aren't known. In One Small Favour, Aggie will ask the player to help her save Jimmy from the cultists before she agrees to be Brian's friend's witness. In Death to the Dorgeshuun, Jimmy will inform the player that Sigmund took Zanik upstairs.

Retrieved from "https://runescape.fandom.com/wiki/Jimmy_the_Chisel?oldid=24562768"
Community content is available under CC-BY-SA unless otherwise noted.