Start a Wiki
RSC
This article is about the prisoner in the Fight Arena. For the guard, see Joe. 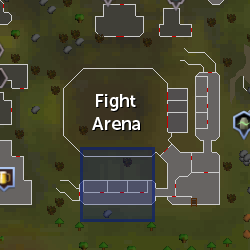 Joe is a prisoner found in the Fight Arena, trapped along with Kelvin in the south-western cell. He and Kelvin are fight-slaves in the arena.

(When you defeat General Khazard but before you leave the Fight Arena, does Joe say anything unique that he didn't say before? Leaving the Arena after defeating the General makes it impossible to go back in and check. Need a newer player to find out).

Retrieved from "https://runescape.fandom.com/wiki/Joe_(Fight_Arena)?oldid=24564027"
Community content is available under CC-BY-SA unless otherwise noted.