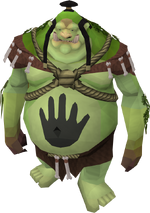 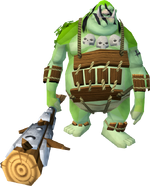 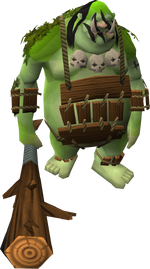 Jogres are relatively large monsters that mostly dwell on Karamja. The level 57 Jogres found on Karamja are aggressive and can be a threat to players under level 115 combat. However, they attack slowly. The Level 86 Jogres are only found in the God Wars Dungeon. These stronger Jogres are aggressive to anyone that is not wearing an item associated with Bandos. Contrary to popular belief Jogres are not poisonous, nor are they immune to poison.

The name is a portmanteau of 'Jungle' and 'Ogre'.

Jogres are one of the 'races' who have lesser champions in the Champions' Challenge Distraction and Diversion. To fight the Jogre Champion, the player must kill jogres until one drops a Champion's scroll, a very rare drop.

Retrieved from "https://runescape.fandom.com/wiki/Jogre?oldid=22933597"
Community content is available under CC-BY-SA unless otherwise noted.