Start a Wiki
For other uses, see Jones (disambiguation). 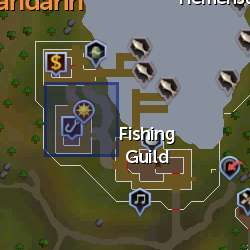 Jones is an elderly fisherman located in the Fishing Guild. He hunts the Thalassus, a mythical creature that he believes is responsible for destroying several ships.[1] He is the cousin of 'The Guns', who he prefers to call Julian,[2] and he names his fishing rod Betsy.[3]

During the quest Deadliest Catch, he requested the aid of a passing adventurer, stating that he had a plan to catch the Thalassus, but he couldn't do it by himself. He asked them to find somebody to create a giant harpoon from his plans, obtain a sea chart from the Master fisher, and recruit his cousin Julian to row the boat. Once these were obtained, the three of them set off north in his boat.

They tracked the Thalassus through the wreckage left behind, occasionally doing a bit of scavenging. They located the beast and Jones attempted to attack it using the harpoon, only to anger it. It knocked Jones and the adventurer overboard, swallowing Jones. The adventurer obtained some karambwan and found Julian again. They tracked down the Thalassus again and fed it the karambwan, forcing it to cough up Jones. The three of them fled and Jones altered his plans, intending to scare the Thalassus away with a special karambwan-based cream. He gave the adventurer a Thalassus tooth to give to Linza the smith as payment for the harpoon, as well as a small and big cast net for their troubles. He also set up several deposit boxes for them to use.

Afterwards, Jones offers to help hunt the Thalassus an additional ten times for a total of 46,660 additional Hunter experience. Doing so is a requirement for obtaining the completionist cape.

Retrieved from "https://runescape.fandom.com/wiki/Jones?oldid=24564458"
Community content is available under CC-BY-SA unless otherwise noted.