A being from a mysterious realm. 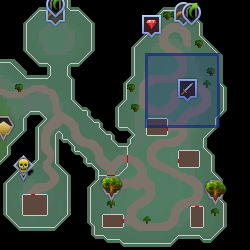 Jukat is a fairy found in the market area of Zanaris who runs Jukat's Dragon Sword Shop.

For those who have not completed Fairy Tale III - Orks Rift, there is a fee of one cut diamond to get through the door that leads to the Market Place. She sells dragon longswords for 100k and dragon daggers for 30k. She sells the off-hand versions of these weapons as well. Players must have completed the Lost City quest to access Zanaris.

Retrieved from "https://runescape.fandom.com/wiki/Jukat?oldid=24563208"
Community content is available under CC-BY-SA unless otherwise noted.