The emissary of Saradomin. 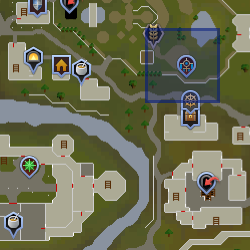 Julienne is a woman acting as the emissary of Saradomin, proclaiming her beliefs to the world. She was also a priestess of Saradomin for several years until she decided to act as emissary. She can be found on the south side of the park in Falador.

According to Julienne, if one chooses to follow Saradomin, she will provide protection from chaos and evil. She will give various tasks to complete, should you choose to ally with Saradomin. Julienne will also give a banner of Saradomin and a Book of the Gods. The title "[Name] of Saradomin" may be activated through this emissary.

Retrieved from "https://runescape.fandom.com/wiki/Julienne,_Emissary_of_Saradomin?oldid=24564894"
Community content is available under CC-BY-SA unless otherwise noted.