Jungle Potion is a short quest that takes place on Karamja. It involves gathering a handful of different herbs for Trufitus Shakaya, in order for him to perform a ritual to communicate with the island's gods.

Trufitus Shakaya of the Tai Bwo Wannai Village requires that you collect five special jungle herbs for a potion so he can commune with his Gods. 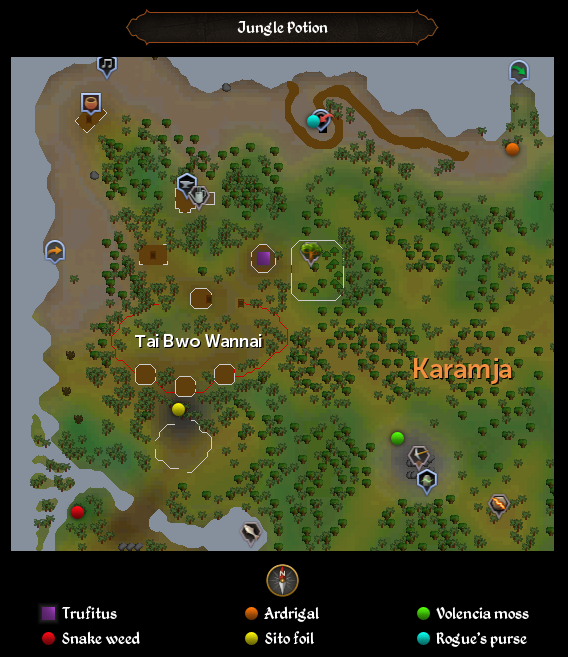 Talk to Trufitus Shakaya at the house which is northeast from the Tai Bwo Wannai Village (south-east of the Karamja lodestone). When you ask him about the absence of people in the village, he tells you that he is equally baffled. He, however, needs to talk to the gods regarding the matter and needs a potion to perform the ritual.

As he is old and frail, he asks you to gather the ingredients required to create the commune potion. The herbs he needs are, in this order:

You will not be able to collect any of the ingredients before Trufitus has told you what needs to be collected. Therefore, you must go back to him after obtaining each herb.

The level 60 Tribesmen are poisonous, and aggressive to players under level 120. Try to avoid them, or bring antipoison.

If you are under level 65, armour and food or the Protect from Melee prayer is highly recommended for this part. 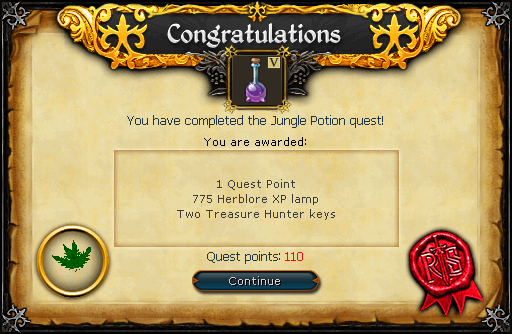 Completion of Jungle Potion is required for the following:

Retrieved from "https://runescape.fandom.com/wiki/Jungle_Potion?oldid=25481454"
Community content is available under CC-BY-SA unless otherwise noted.