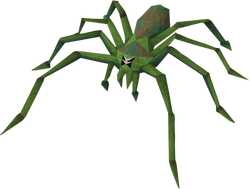 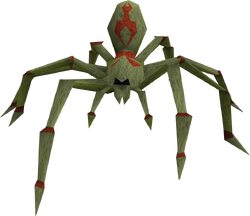 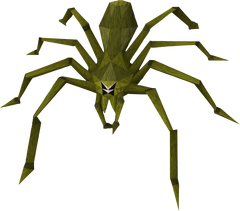 Jungle spiders are monsters that can be found on Karamja and the archipelago east of Yanille. They are usually invisible on the minimap so they can be a threat to low level players who don't notice them. Jungle Spiders appear in the Tai Bwo Wannai Cleanup minigame and in the Jade vine maze. When these appear, they would only attack with melee with a max hit of 1. They would switch to ranged with their normal max hit if they cannot reach their target, or if they lose interest and then were attacked by a player again.

The level 86 jungle spiders are good monsters to train on if you have level 50+ combat skills, and are an excellent alternative to Deadly red spiders. Like most spiders, they are primarily weak against crushing weapons, although other melee weapons will work effectively.

If you have 50 Attack, then dual wield the Rune warhammer and the Off-hand rune warhammer. If you have 60 Attack and Strength, then use the two-handed Tzhaar-ket-om.

Despite their appearance, they are not poisonous.

Jungle Spiders are found in:

After a hidden update, the jungle spiders at Musa Point became attackable to free players. These spiders are only level 21 and do not drop spider carcasses on free-to-play worlds.

The following are only dropped by the Jade Vine jungle spiders.

Each received only once, unless destroyed after receipt. Drops all six parts of Clarence during the Returning Clarence miniquest.