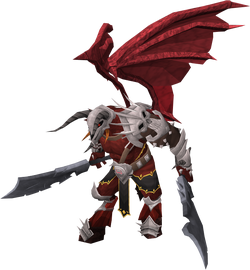 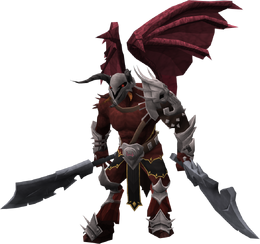 K'ril Tsutsaroth (pronounced KRILL TUTT-zee-roth) is a demon currently stationed in the God Wars Dungeon, no longer frozen due to the tectonic movements in the Wilderness. He was summoned to Gielinor in the Third Age by the Mahjarrat Bilrach, and is now the commander of the Zamorak armies within the God Wars Dungeon. To enter his camp, players must have 70 Constitution. To gain access to his chamber, players must kill 40 Zamorakians.

K'ril is a member of the Tsutsaroth tribe of demons. These were the ruling tribe of a race known as Avernics, which were the slaves of the ruling Infernals, then the Chthonians, until Zamorak led them in an uprising following his ascension.

When he swipes his target once each with his scimitars, he is using his melee attack. When he slams both of them onto the ground and orange flames appear, he is using his magic attack. When he slams both scimitars down and a cloud of black gas spreads out, as well as exclaiming "YARRRRRRR!" then he is using his special attack. K'ril targets one player, however, anybody standing on or one space near that player will also be hit and the damage will be divided between the players, so non-tanking players should stand away from the tank. This attack will drain half of the player's prayer points upon hitting and capable of dealing max 6,600 damage.

K'ril is most often killed for the Robes of subjugation, Zamorak hilt, and Zamorakian spear, but some players kill him (or his bodyguards) for Slayer or recreational purposes.

K'ril Tsutsaroth is classified as a greater demon; thus, killing him counts towards any greater demon Slayer task, and also allows a player to take advantage of the abilities of Slayer boosts.

Obtaining all unique drops will unlock the [Name], Brawn of a Tsutsaroth title.

The easiest way to get there is to cast God Wars Dungeon Teleport and then run north to the hole. Once inside the dungeon, the player must run north and jump across the bridge. Alternatively, a Trollheim Teleport can be used to teleport a short distance south of the entrance, from where the player needs to run north, push aside the boulder and then run to the hole.

If a player has access to the Max Guild, they can (re)tune the portal there to teleport directly to the area just outside the big door leading to K'ril Tsutsaroth.

In his chamber, K'ril is accompanied and protected by three demonic bodyguards: Tstanon Karlak (greater demon, melee), Zakl'n Gritch (lesser demon, ranged), and Balfrug Kreeyath (black demon, mage). Upon spawning, he will spawn all three bodyguards to fight alongside him. If he is not killed within a certain amount of time, all three will respawn.

K'ril Tsutsaroth appears in The World Wakes, as part of the Zamorakian faction invading Guthix's cave. The Zamorakians' aim was to kill Guthix in order for their god to return, along with the Saradominists, Armadyleans, and Bandosians. After the player fends off against an assault from General Graardor and Zemouregal, K'ril and his forces attack the chambers. However, his attack fails and he quickly retreats after being defeated by the player.

K'ril Tsutsaroth makes a small appearance in Missing, Presumed Death. He is at the Empyrean Citadel on behalf of Zamorak, who is attending Sliske's Grand Ascendancy. His audio changes slightly depending on if the player follows Zamorak and/or fought for Zamorak during the Battle of Lumbridge.

Tales of the God Wars

K'ril plays a small role in the Tales of the God Wars, where he is seen in Zamorak's secret hideout underneath Daemonheim. He is a part of the Twin Furies memory, where he has already explained the situation to Zamorak, who is content with his progress.

The player needs to defeat him at least once with an empty tome in order to obtain the Twin Furies' memory.

Retrieved from "https://runescape.fandom.com/wiki/K%27ril_Tsutsaroth?oldid=24926387"
Community content is available under CC-BY-SA unless otherwise noted.