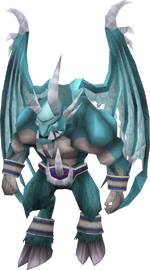 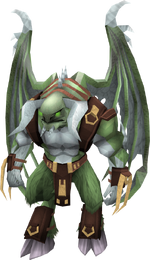 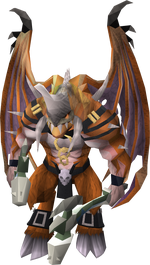 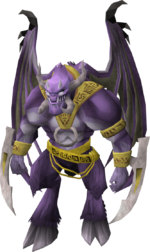 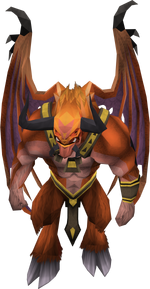 Kal'gerion demons can be assigned as a Slayer task by Kuradal or Morvran, to players with at least level 90 Slayer, but this is not required to kill them normally. However, 90 Dungeoneering is required to attack them.

If the player is killing Kal'gerion demons for a Slayer assignment then they can gain 20% additional Slayer experience by equipping a demonic skull while killing them at the Demonic Ruins. They can gain another 20% extra experience per kill if they accept a special slayer contract from Erskine while assigned Kal'gerion demons as a Slayer task if they kill the demons at the Demonic Ruins. These experience bonuses stack, meaning the player may gain 40% extra Slayer experience. Completing a special slayer contract rewards the player with a choice of coins or combat experience.

Kal'gerion demons have high defence and life points. While they list no explicit weakness, magic is the most consistently hitting style and provides the best defence against their melee attacks. However, an upgraded Darklight from the Dimension of Disaster quest will also work well, in addition to dealing more damage to the demons. If accuracy is a problem, players can try using various accuracy bonuses such as a Slayer helm with a Kal'gerion demon task, prayers, overloads, Reaper necklace, Scrimshaw of ranging, Sharpshooter aura, or a Blood nihil familiar.

Kal'gerion demons only deal melee-type damage, but their attacks are long-ranged, so they cannot be safespotted.

The demons can potentially kill offensive familiars - having Incite active and using Provoke can help prevent this.

Be wary of using multi-target attacks, as more than one demon attacking could prove problematic.

The demons have two possible special attacks. Each demon will only special attack once in the entire fight. In the resource dungeon, the special attacks can be avoided by hiding behind the rocks scattered throughout the dungeon. There are no such rocks in the Wilderness, so you will most likely take damage unless you hide behind a wall in the Demonic Ruins. The demon will charge up the special attack; in some cases, it can still be hurt while charging, and in others, be invulnerable to incoming damage during the animation. Stuns will not interrupt the special attack. Both special attacks deal typeless damage which cannot be reduced by prayers or blocked by Devotion, and will ignore Resonance, Reflect, Debilitate, and any other damage reduction abilities such as Anticipation or Pulverise. However, the damage can be blocked by Barricade, or reduced by 50–100% with a defender, rebounder or repriser. The special attacks also will not trigger a Portent of restoration.

Special attacks will also be followed almost simultaneously by a standard melee attack from the demon. In the Rush of Blood Distraction and Diversion and those in the Sunken Pyramid, the demon may attempt one of these two attacks, but they will have no effect on the player.

There is an additional attack that will also be used by the demon if you hide behind a rock or move too far away. The demons can do this at any time, and more than once per fight. It is possible for this attack to override one of the main special attacks.

Retrieved from "https://runescape.fandom.com/wiki/Kal%27gerion_demon?oldid=24309122"
Community content is available under CC-BY-SA unless otherwise noted.