Kalphites (a.k.a. the Kalphiscarabeinae) are a species in RuneScape that resemble a mix of scarab beetles and cockroaches. The normal hive is located west of the Shantay Pass and is located north of the Bedabin Camp (a Fairy ring BIQ can be found near the entrance), and their nursery is north of the main hive. The hive of the Exiled Kalphites is located south of the Jaldraocht Pyramid and north of Menaphos.

The origins of the kalphites are unknown, but many people say that they were created when the desert god Scabaras accidentally dropped some of his blood on some scarabs, turning them into kalphites. Some people, mostly scientists, don’t believe this theory and go for a more natural theory.

The kalphites are the largest known insects in all of Gielinor. They are related to beetles and scorpions, are green in colour, and have remarkable antennae which can detect the slightest movement. Their carapace consists of armoured plates called lamellae. The shell can be compressed into a ball. They also use it to sense odours by fanning the carapace out like leaves. They use their front legs to dig enormous tunnel networks which they use as their nests. The Kalphites exist in a caste-based society, very much like bees, as stated by the spirit kalphite.

All kalphites start off as larvae. The Kalphite larvae are newly hatched Kalphites, but will develop fairly quickly. Unlike the other kalphites, larvae are completely harmless to humans as their chitin is not developed enough. They are very hard to catch and are often chased with the help of a cat.

Kalphite workers are kalphites who oversee the colony's necessities. A few workers are capable of turning a camel into nothing but bones into a matter of seconds. Workers care for the colony's eggs and larvae. While they are not as developed compared to the soldiers or guardians, they will defend their colony if necessary. However, the exiled workers are far more timid and will retreat deeper into the colony if wounded enough.

Kalphite soldiers are kalphites who defend the colony from aggressors. Unlike the workers, they are much more aggressive, better developed and are capable of injecting poison into their enemies. The exiled colony possesses two types of soldiers; the soldiers who use their mandibles to bite their enemies, and paragons who hurl bolts of raw magical energy at their enemies.

Kalphite guardians are kalphites who are essentially the colony's "supermajors", as they are larger and even more aggressive compared to the soldiers. They are often posted in important positions in the colony, such as their queen, and are capable of poisoning their enemies. Much like the soldiers, the exiled colony possesses two types of guardians; the guardians who act much like their soldier counterparts, and marauders who act much like the paragons.

The Kalphite Queen is one of the strongest kalphites, and is the leader of a colony. Unlike the soldiers and guardians, her exoskeleton is less developed, but it is still far stronger and capable of shrugging off attacks with ease. The Queen lays eggs on a daily basis, which are taken by the workers to be cared for. Kalphite Queens are capable of using all three forms of combat, and have two forms; an beetle-like form which fully protects her from ranged and magical attacks. If the invaders manage to severely damage this form, the Queen will shed her carapace to reveal a wasp-like creature which fully protects her from melee attacks. She may also call developed worker larvae to assist her should her life be in danger. A colony cannot survive without a queen - if no queens are found in a colony, a larvae will quickly developed into one to fill the gap. Thus, it is very hard if not impossible to exterminate a colony of kalphites.

The Kalphite King is an even stronger Kalphite. His role in the colony is unknown, but it is assumed he mates with the queen to start a colony. Like the Queen, he is capable of using all three forms of combat, but he is limited to one attack style at a time while the Queen is able to use all three styles of combat at any time. The juices the King generates is extremely dangerous, as it is extremely sticky and getting hit by it makes the victim helpless as he lunges in for the kill. Only one King has been seen as of the Sixth Age, and he resides in the exiled colony.

Sometime in the year 169 of the Fifth Age, a second colony was established by a group of kalphites that had been exiled from the original colony. The kalphites here are far more organized and dangerous, as they have implemented the use of magic-using kalphites who use their magical energy to defend the colony from invaders. It is assumed that these kalphites will soon go to war against their old colony, though they have not done such an action well into the start of the Sixth Age.

Amascut managed to bring some exiled guardians and marauders into her control. Unlike the other kalphites, these corrupted kalphites require a Feather of Ma'at to kill them, and only the most experienced Slayers can harm them.

There are also other species of kalphite; clicker kalphites, who use their mandibles to communicate loudly. They are the desired prey by plover birds. Kalphite wanderers are kalphites outside of the hive colony, and have regressed to minute sizes. Amber-preserved kalphite wanderers are highly sought after by Menaphos' merchants, as they are seen as a symbol of luck.

Rolls a ball of dung. 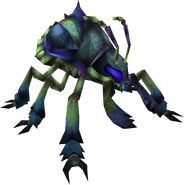 One of the many kalphite workers 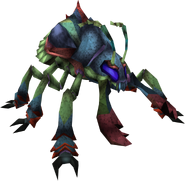 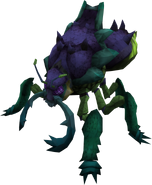 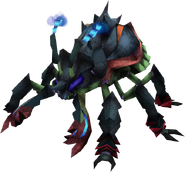 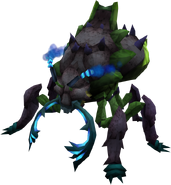 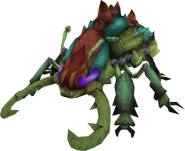 The first form of the dreadful Kalphite queen

The second and true form of the Kalphite queen 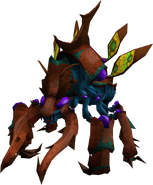 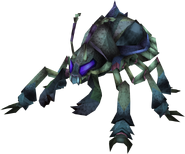 A spirit kalphite from the spirit plane 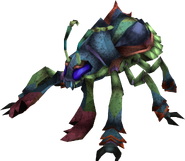 Retrieved from "https://runescape.fandom.com/wiki/Kalphites?oldid=24924005"
Community content is available under CC-BY-SA unless otherwise noted.