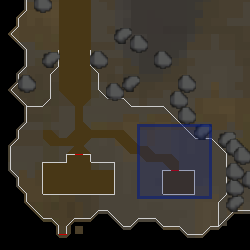 Kamen is a dwarf trapped in the Underground Pass. He came to the pass along with Klank and Niloof seeking rare ore, but was trapped there by the evil created by the mage Iban. He helps you during the quest by giving you food.

After the first free gift of food, and during subsequent quests, he will charge 75 coins for a 'dinner' of meat pie, bread, and stew (these 3 items, when consumed, yield 280 life points). Alternatively, you can accept his offer for his homemade brew, in which you receive the same amount of food for free, but you will take 30-50 life points and will temporarily lose a few Agility levels.

Retrieved from "https://runescape.fandom.com/wiki/Kamen?oldid=24563229"
Community content is available under CC-BY-SA unless otherwise noted.