RuneScape Wiki
Register
Don't have an account?
Sign In
in: Non-player characters, Warriors' Guild, NPCs from the Eastern Lands 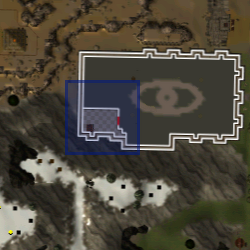 Kamfreena can be found at the top floor of the Warriors' Guild. If you have more than 200 Warrior Guild Tokens, she will let you enter a room filled with Cyclopes, which have a rare chance to drop Defenders of various kinds. Staying in this room costs 15-20 of one type of Warriors Guild Points, or a few of each per minute. She wields both a steel two-handed sword and a defender at the same time.

When trying to activate the Ancient Curses a message will appear saying Kamfreena frowns on using curses and the prayer will not activate.

She is one of four people who may wield a 2-handed weapon and a shield. The others are Damis, Vannaka and Sir Vant.

Her dialogue consists of proverbs from various sources ranging from Zen monks to English authors.

"When you aim for perfection, you discover it's a moving target."

"Patience and persistence can bring down the tallest tree."

"Be master of mind rather than mastered by mind."

"A reflection on a pool of water does not reveal its depth."