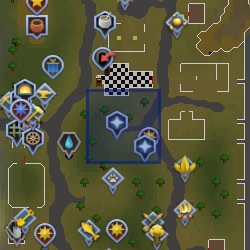 Kaqemeex (pronounced /keɪk mɪks/) is a Guthixian druid who can be found in the Druids' Circle in Taverley. Kaqemeex is the chairman of Collected Appreciators of RuneScape's Environment (CARE), an environmental organisation working to prevent damage to Gielinor's environment[1]. In the quest While Guthix Sleeps, Thaerisk Cemphier claims that Kaqemeex is a supporter of Crux Eqal, an underground organisation of druids who are currently working to combat the threat of the Mahjarrat.

Kaqemeex is the start point of the quest Druidic Ritual, the quest required to start learning the skill of Herblore. During the quest, players learn that he is the master for Herblore. Players with level 99 in Herblore may buy the Herblore cape from him for 99,000 coins.

Kaqemeex plays a small role in the RuneScape novel, Betrayal at Falador, where he is revealed to have the ability to converse with animals.

In his reply to a question about the impact of Firemaking and Smithing on the environment of Gielinor, Kaqemeex explains:

Retrieved from "https://runescape.fandom.com/wiki/Kaqemeex?oldid=24562449"
Community content is available under CC-BY-SA unless otherwise noted.