All you see is a glimmer of light and the suggestion of shadow. 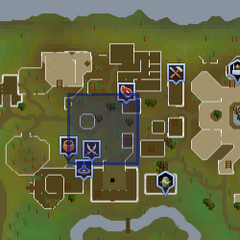 Karam is a member of the 10th Squad who appears in invisible armour, similar to the ghostly robes. When he does not move he used to be almost totally invisible (before the Gnome update, he is now very easy to see), leaving no trace of him except for his shadow and the "!" he uses to notice players (which he does when the player is caught). He is camouflaged very easily and spies on the monkeys in Marim. He is found in several locations around the Ape Atoll but can only be talked to when he is seen hiding in the long grass behind the Marim Jail.

Most of the time Karam is completely useless even if the ninja monkey walks right through him. It is hard to get him to attack the guards, the easiest and fastest way to get ninja monkey bones is to just kill one of the archers on the platform in the northwest of the market area (can be attacked by melee and bones can be looted from platform).

Retrieved from "https://runescape.fandom.com/wiki/Karam?oldid=24562922"
Community content is available under CC-BY-SA unless otherwise noted.