A dark and evil crone. 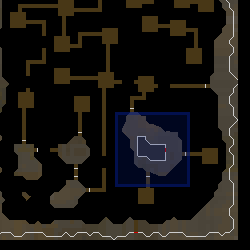 Kardia is an old witch who lives in the Underground Pass and has lost her cat. She is the only person that knows how to destroy Iban, and the doll used to do so is inside her house. She is also immensely powerful, as she is the one who resurrected Iban in the first place.

The bridge to her house is on the east side of the maze, near the south end.

After completion of the Swept Away quest, she will reward broomstick-owners with 14,979 Magic experience points if they use their broom on her. A level of 93 Magic or above is required, although players can use stat-boosters (like a Magic potion or Vecna skull) to reach the level requirement. God Emissary banners do NOT work for this requirement.

The fastest way to reach Kardia (after the completion of Mourning's End Part II) is through the Abyss, Wicked hood, or Tirannwn quiver to get to the Death Altar and then take the tunnel that leads into the Underground Pass (which is directly west of the Death Altar); after entering, take the cave stairs to the east. Another fast way to get to her is by going through the "Cave Entrance" just north of Lletya, climb down the well, exit the doors and go south. Alternatively, anyone with a Fang of Mohegan may teleport to the Well of Voyage, and run to her house.

Maggie, possessing knowledge of Kardia and her whereabouts along with other powerful Gielinor witches, tells the broomstick-owners that Kardia might "not talk to you" but will enchant your broom if you are sufficiently skilled.

To get your Magic experience for the trimmed completionist cape requirement, use the broomstick with Kardia to get it enchanted.

Retrieved from "https://runescape.fandom.com/wiki/Kardia?oldid=24563267"
Community content is available under CC-BY-SA unless otherwise noted.