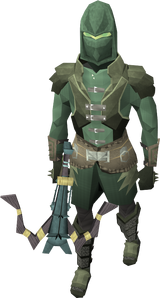 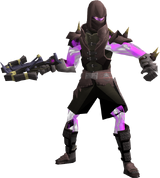 Karil the Tainted is the fourth oldest of the six Barrows brothers. Karil's crypt is located in the lower south end of the Barrows area. He attacks with ranged using his 2-handed crossbow and bolt racks.

Karil's set effect: Karil's Taint, allows his hits to have a chance to reduce the player's magic level. When this effect is activated an animation and sound effect are triggered, and the player will suffer a loss of a magic level. This effect is not very damaging to a player if they are not using magic, particularly if Overloads are used. Regardless, his hits are rather accurate so protection prayers/curses are advised. Soul split can also be used, but should only be utilised by experienced players.

During the Morytania-Misthalin wars, the Barrows brothers were devastating the Undead armies, cutting through their lines with ease. Karil was known for his secrecy and accuracy in battle; "Should any enemy manage to survive long enough, and have the chance to strike a blow, Karil would fire a swathe of bolts to pepper their chest as they took their swing, throwing them back" (this is a quote taken from The Fall of Six under the Lores section of RuneScape).

Karil's crypt is located in the lower south end of the Barrows area. He's weak to stab attacks, but is also rather weak to melee styles in general, therefore it is recommended to use a strong weapon such as a Zamorakian spear, chaotic rapier or drygore rapier in conjunction with their off-hand variants. However other weapons such as the chaotic maul can also take down Karil just as easily.

It is common for many players attempting to slay the Barrows brothers to kill him with magic as it saves having to bring another combat style, however if this is the case caution should be taken when fighting Karil as he will deal heavier damage to mages than to melee fighters.

Karil does not drop his main rewards directly; instead, his equipment is added as possible rewards from the Barrows chest. See Barrows#Rewards for more information. However, Karil can directly drop the following items.

Karil returns with his 5 brothers in Barrows - Rise of the Six, greatly enhanced by Sliske's experiments into the Shadow Realm. As when fought normally, he retains his set effect, and also has various other abilities. He has a special attack called Shadow Dash where he will dash into the shadows leaving behind Shadow portals in the process. If a player enters the portal, they will take 500 damage and be sent to the other side of the arena. If no one enters the portal, it will explode and can deal up to 8000 damage depending on how close the player was to the portal. He also has a special attack called Rolling Thunder, where he will send a line of lightning across the arena, dealing heavy damage if the player doesn't move away.

During the 2016 Easter event, Karil the Tainted and his brothers play a role as the workers (bobble-numbskulls) of Sliske's chocolate factory. They resembled their bobble-head versions.

Karil, along with his brothers, appeared in Sliske's Endgame, being the second intended wave in Sliske's attempts to destroy the World Guardian. However, the Barrows Brothers had managed to regain a modicum of control over their own actions, and chose to aid the World Guardian, attacking Sliske's wights and champions.

The new model for Karil's armour revealed at RuneFest 2011. Curiously, it has a quiver with arrows, while Karil's crossbow uses bolt racks, not arrows. 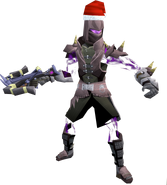 Shadow Karil wearing a Santa hat during Christmas.
Click an image to enlarge

Retrieved from "https://runescape.fandom.com/wiki/Karil_the_Tainted?oldid=23452706"
Community content is available under CC-BY-SA unless otherwise noted.