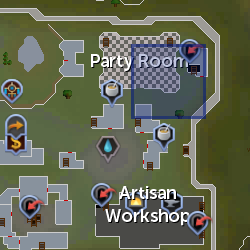 Karma the chameleon is Party Pete's pet chameleon. According to Pete, he received Karma as a Christmas present one year. Pete claims that Karma keeps the Party Room free of flies, and that he loves watching him dance.

He can be spoken to by players with 99 Summoning if they boost to level 100 via a Summoning cape. He doesn't say much, but like Pete himself, he claims to enjoy parties.

Retrieved from "https://runescape.fandom.com/wiki/Karma_the_chameleon?oldid=24563741"
Community content is available under CC-BY-SA unless otherwise noted.