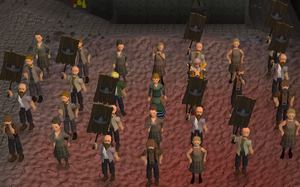 The Keldagrim Monarchist Society is a society within Keldagrim that featured heavily in the King of the Dwarves quest. The society protested against the rule of the Consortium and demanded the return of kings to rule Keldagrim, using the Azdaran Fragment as evidence of their claim that the Consortium should step down. Eventually, the Consortium yielded to their demands and instated Veldaban as king. Although Hreidmar was the true heir to the throne, he was not crowned since the documents in the Records Chamber falsely stated that Veldaban was the heir due to an alteration made by Meike during the quest.

Retrieved from "https://runescape.fandom.com/wiki/Keldagrim_Monarchist_Society?oldid=15401450"
Community content is available under CC-BY-SA unless otherwise noted.