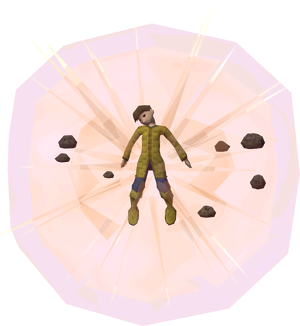 Kennith is a boy, later a man, who is featured prominently in the quests Sea Slug, Kennith's Concerns, and Salt in the Wound. He can be found at his house in Witchaven after the quest Sea Slug, with his parents Kent and Caroline. He and his parents, as well as Holgart and Ezekial Lovecraft, are the only people in Witchaven who are not possessed by sea slugs by the end of Slug Menace.

After Kennith's Concerns he is seen at the Fishing Platform, helping Bailey purge it of the sea slugs. Also, at the end, he says that the Queen is coming for the player.

During the Sea Slug quest the player is enlisted by Kennith's mother to find him after he and his father went to the fishing platform and did not return. During Kennith's Concerns, it is seen that he has some sort of magic power - it appears to be telekinesis or mind control (or both). In Salt in the Wound, he assists the player in infiltrating Mother Mallum's citadel with his magical abilities.

Between Kennith's Concerns and Salt in the Wound, Kennith seems to age by about six years. He is the first character to age within the year of the game.

During Salt in the Wound Kennith joins the player together with Eva Cashien and Ezekial Lovecraft in his quest to kill Mother Mallum. He explains that he realised that he had been acting childish and decided to grow up, and, probably because of his special powers, he did. At the end of the quest, he decides not to go home yet, and decides to have some more adventures. He says that he might go to the Wizards' Tower, but after the quest, he is not there.

Nope, that's a job for you.

Kennith's Theme
The music that plays when Kennith captures Kimberly during Kennith's Concerns. It is a remix of A New Menace.

Kennith's Theme
The music that plays after Kennith is pacified during Kennith's Concerns. It is a remix of A New Menace.

Retrieved from "https://runescape.fandom.com/wiki/Kennith?oldid=24562414"
Community content is available under CC-BY-SA unless otherwise noted.